Every nation–every peoples–needs mythology.  It gives them a sense of the past, it gives them a basis for their present, it makes for instilling a sense of importance and tradition to their children.

Every nation–every peoples–needs mythology.  It gives them a sense of the past, it gives them a basis for their present, it makes for instilling a sense of importance and tradition to their children.

In most cases, having a mythology does no harm and can be described as "good."  And. of course, the stories make for great reading.  Who has not enjoyed–even thrilled at–reading the myths of the ancient Egyptians, the Assyro-Babylonians, the Greeks, the Romans, the Teutonic/Norsemen, and the others?  And, of course, Armenian mythology which tells of legends that go back to pre-history.  Mythological stories, by definition, are rooted deep into the past.

The pity comes when people–usually encouraged by their leaders–believe in the mythology as fact and use it as a basis of asserting superiority over someone else and his mythology.

Because it is still a new country, America has its own brand of mythology, and we have seen that those who worship the American myths have caused the recent financial problems.

Some of the American myths, to which I refer, are "our presidents never lie, and when they die they go to heaven and sit at the right hand of God," "deregulation is good, regulation is bad," "give the rich more money, and some of it will trickle down to the poor."   And, let us not forget the myth: "Don’t look into the past, because you might learn something."

This last one is very important to Wall Street (and, dare I say?, to Congress).  Back in the dim past (and you may read that word "dim" in any way you want!), when I used to dabble in shares on the Stock Market, I had a broker who remembered the 1929 Crash and the years of the Hoover Boom.  Whenever I wanted to buy a stock, I knew there would be two questions from Al: "Why?" and "What do you know about it?"

He would listen to my answers and then comment as appropriate, but, inevitably, he would resist buying until he checked on the stock.  Sometimes, I ignored him, sometimes I went along.  I can say only this, if I listened to Al in everything he said, I would be a rich little boy.  Which I ain’t not.

Although we are not talking about ancient history, that was a different era.  The Als of that world are out of place in today’s world.  They had that rare quality called "integrity."  They had scruples.

When I was young, we had a fascinating friend who had been a Western Union messenger in New York when he came to America, and he used to say that the boys would literally fight with each other to deliver a telegram to the home of John D. Rockefeller because his butler would always tip twenty-five cents whereas others would tip only ten cents.  Simon would say, with a hearty laugh, "I now wonder how many millions he made on the contents of those telegrams, for which we received a quarter."

It may be that the America that produced those "Robbers," had a different set of myths, and it may be that today’s America has no room for those myths. Those men probably wouldn’t qualify for the title of "angels," but one of them built libraries all over the country, others founded and supported universities, others created and supported museums and other cultural institutions.  They endowed the cultural institutions that we take for granted today.  These they did, and more, in addition to the industries they created.

Today’s multi-millionaire scoundrels who created the financial mess in which this country now finds itself–and, in this global world, other countries as well–will not leave behind them libraries, universities, museums.  They will leave behind them homeless families, destroyed retirement plans, dead education plans for children, demolished career hopes–all because of their worship of greed.  And politicians standing in a circle pointing at each other for failing in their obligations to the people who sent them to Washington.

Do you remember the first words spoken by The Arab in William Saroyan’s "The Time of Your Life": "No foundation, no foundation all the way down the line"?  That can summarize the current situation.

In the aftermath of the debacle, Alan Greenspan, had the audacity to confess that no one could have foreseen what had occurred.  What utter self-justifying, self-serving  balderdash!  It is as if a city decided to shut-down all traffic signals as a cost-savings effort, and then wonder why there are so many automobile accidents.  He, if not the architect, is as responsible for the troubles since he was supposed to be the one who should have said, "Hey, wait a minute.  Let’s see what is going on."

What he is really saying is that we ignored those voices who said that there was trouble ahead if we did not change what we are doing.  Voices like Peter Schiff, reading whose book "Crash Proof" is like reading the morning newspaper.  It was written in 2006, and everything he predicted is happening.

As the Vicar on Earth of the God of Greed, Greenspan encouraged the deregulations of the financial industries, because if the rich make money, some of it will trickle down to the poor.  Raise your hands, all of you who got some of the millions that was supposed to trickle down.

But, we must not forget the supreme myth of all:  "America’s economy is based on capitalism."  As the "Robber Barons" showed, it used to was.  Today, America has a two-tier economic system.  There is Capitalism for the Poor, and Socialism for the Rich.  Proof?

As you take your coffee break in mid-morning at your favorite café, with your newspaper (with its depressing news) propped up in front of you, stop a moment and ask yourself, if the proprietor of the café were to discover that as a result of bad buying practices and poor pricing policies he is dangerously close to going out of business and if he were to decide to go to Washington and ask the Government for $50,000 to cover his losses, what do you think he would be told?  No prize for guessing that it would be, "Sorry, Buster, but this is a capitalistic society.  Solve your own problems."

But, then let your mind work over to the situation that we have today.  The banks and financial institutions through their greed who created the mess, have gone to the government and have said, "We sorta kinda made a mess of things and we need some money to cover our losses," We know what the government has responded: "Don’t be too reticent, here is $700-billion of tax-payer money.  If that’s not enough, come back for more."  That, boys and girls, is Socialism at its simplest definition.  It’s part of the new mythology.  Let us not forget that the original three-page proposal submitted to Congress by the Administration had nothing for the hapless home-owners!

As this is being written, none of the banks who are receiving the vast largesse from the tax-payer is talking about lending some of that money to the people, to the businessman who needs ready cash to keep his business going, to those who are still in danger of losing their homes.  No, those ungrateful and selfish banks are thinking of using the money to buy other banks and increase their profits or, as one of them has said unabashedly, "for other purposes."  There will be no prizes for anyone who guesses that the "other purposes" will enrich the banks and the bankers.

This change from Capitalism to Socialism is not new, however, though it has been gradual.  In 1948, I was covering all three political conventions (Democratic, Progressive, Republican) for my father’s newspaper (they were held in Philadelphia), and the press area was a square-cornered U fronting on the stage.  From where I was sitting, I saw Norman Thomas almost directly opposite.  I hurried to a friend who was working with ABC Television News, and called his attention to Thomas.  The crew hurried to Thomas.  In those days, the TV cameras needed bright lights and, when the lights went on, all the other news media sensed something important and they, too, rushed over.  ABC was already interviewing Thomas, and the journalist asked, "Mr. Thomas, will you be running for president again?" [Thomas had run six times on the Socialist ticket.]  Thomas replied, "No.  Everything that I campaigned for we now have."  Of course, he was speaking with tongue in cheek.  It took some time for the powers-that-be to refine Thomas’s Socialism for all and to apply it only for the rich.

Maybe the rot set in when people accepted that there was no Santa Claus and no Tooth Fairy.  But, wasn’t it a better world when we believed in them? 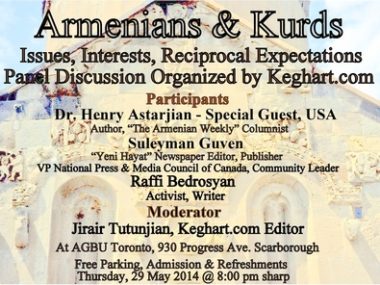 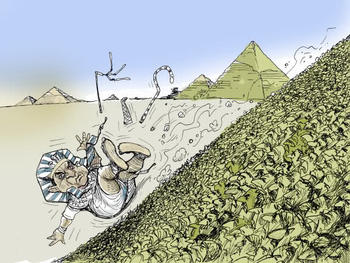 Read More
And the Gay City Bankers of London By Professor H.I Pilikian, London UK, 23 February 2011 Something has…
Read More
0
0
0

Read More
Judy Rebick, Transforming Power, 3 May 2011 It was an extraordinary election. Both Stephen Harper and Jack Layton…
Read More
0
0
0