Vicken Cheterian is a journalist and political analyst who works for the non-profit governance organisation CIMERA based in Geneva. It is a private, non-profit organization founded in 2001. CIMERA specializes in political governance in the following fields: Inclusion of Minorities, Women Participation, Language Policy and Education, Media and Access to Information, Migration and Trafficking and Conflict Transformation. The staff also offers political, conflict and policy analysis, advises in strategic and organisational development and conducts research as well as needs assessment, coaching, backstopping mandates and evaluations.

CIMERA’s interdisciplinary team of recognized professionals includes journalists, political and social scientists, psychologists, linguists and experts on international relations. They all have a proven ability to design and implement projects in strong collaboration with partner organizations and experts in Eastern Europe, the Balkans, Russia, North Africa, the Caucasus and Central Asia.

Cheterian is the author of War and Peace in the Caucasus: Russia’s Troubled Frontier (C Hurst, 2009)

Vicken Cheterian is a journalist and political analyst who works for the non-profit governance organisation CIMERA based in Geneva. It is a private, non-profit organization founded in 2001. CIMERA specializes in political governance in the following fields: Inclusion of Minorities, Women Participation, Language Policy and Education, Media and Access to Information, Migration and Trafficking and Conflict Transformation. The staff also offers political, conflict and policy analysis, advises in strategic and organisational development and conducts research as well as needs assessment, coaching, backstopping mandates and evaluations.

CIMERA’s interdisciplinary team of recognized professionals includes journalists, political and social scientists, psychologists, linguists and experts on international relations. They all have a proven ability to design and implement projects in strong collaboration with partner organizations and experts in Eastern Europe, the Balkans, Russia, North Africa, the Caucasus and Central Asia.

Cheterian is the author of War and Peace in the Caucasus: Russia’s Troubled Frontier (C Hurst, 2009)

A process that began with "football diplomacy" between Armenia and Turkey has developed into the real thing, as the countries’ foreign ministers signed two protocols on their future relationship at a ceremony in Switzerland on 10 October 2009. The presence of senior international dignitaries at the event – among them United States secretary of state Hillary Clinton, Russian foreign minister Sergei Lavrov, French foreign minister Bernard Kouchner, European Union foreign-policy chief Javier Solana – reflects the geopolitical importance of the deal.

But this is but a stage in a long story, not its culmination; and the context and content of the agreement between these bitter adversaries reveal that the most serious problem between them – the genocide of the Armenians in 1915 and after – has been handled in a very bad way. This guarantees further dispute and tension, with the likelihood of ultimate breakdown.

When Turkey’s president visited Yerevan to attend a World Cup qualifier between the two national football teams on 6 September 2008, I was hopeful that Turkey was seriously shifting its foreign policy in the direction of its proclaimed "zero problems" with its neighbours. In particular, I thought that Turkey would as part of a rapprochement with Armenia put an end to its sixteen-year long blockade of Armenia (imposed at the time of the post-Soviet confict between Armenia and Azerbaijan over Nagorno-Karabakh).

This expectation was overturned when I read the protocols on establishing diplomatic relations and opening borders, which were made public on 31 August 2009. My impression was that Armenia was being forced to pay a high price, both morally and politically; that the documents set a bad precedent, in allowing strong states with a dark past to revise history at the negotiation-tables, with the blessing of world powers; and that the existing international political framework seems unable as a result to accommodate the grievances carried by the descendants of genocide victims.

To understand the limits of the Armenia-Turkey accord, a brief survey of the history they fail to address is unavoidable.

The heart of the issue that divides Armenia and Turkey is the uprooting, exile and massacre of almost the entire Armenian population of the Ottoman empire during the first world war, when the powerful Young Turk leaders Enver and Talat came to the view that the empire’s Armenian subjects of the empire constituted an "enemy within". Only a very few Armenians, mainly in the then capital Istanbul, survived out of a pre-genocide population of around 1.5 million.

There is copious documentation in many national archives – German, British, French, as well as Turkish and other – about what Armenians call the meds yeghern (great catastrophe). But despite this, and vast subsequent research material, the modern Turkish state continues – after ninety-four years – to deny the genocidal intention of its Ottoman predecessor. Turkey’s official narrative claims by turn that the relevant events were part of a civil war, in which Armenians also were agents of massacre against "Muslims"; and that in any case the Armenians deserved whatever happened to them because they had betrayed the empire and collaborated with the Russian and Tsarist enemy. Either version is governed by denial: of the reality of genocide, of the experience of victims, of the responsibility of perpetrators.

The Turkish state has made huge investments to spread this narrative via support for publications and payment of researchers, journalists and lobbyists. Against this, Armenian diaspora organisations have been active from 1965 in lobbying to seek international recognition of the genocide. Many researchers have continued to document and deepen understanding of the tragedy; these include Turkish scholars such as Taner Akçam.

The collapse of the Soviet Union and the emergence of independent Armenia in 1989-91 gave the whole affair a new dimension. Turkey recognised the Republic of

Armenia, but did not establish diplomatic contacts. As the war in Nagorno-Karabakh escalated, Turkey shut down even the limited cross-border exchange (principally the Gyumri-Kars rail link) that had existed in Soviet times.

In 1993, Turkey joined Azerbaijan in imposing a blockade on Armenia in the attempt to force Yerevan to abandon its military (and political) support of the Karabakh authorities. Turkey later added two new preconditions before it would consider establishing diplomatic relations and raising the blockade: that Armenia accepted the 1921 treaty of Kars between Kemalist Turkey and Soviet Russia (which established the current state borders), and that Armenia ceased pursuing international recognition of the genocide.

The US state department acted as mediator between Ankara and Yerevan for over a decade, without result. The event that shuffled the cards in the region was the war between Russia and Georgia in August 2008. This made the opening of the Armenia-Turkey border look more attractive to both Moscow and Ankara for trade and security reasons, and fuelled Turkish diplomatic talk of "zero problems" with its neighbours.The election of Barack Obama, who during his campaign had promised to recognise the Armenian genocide, acted as a further pressure on Ankara. The status quo was starting to appear untenable.

It was in the wake of the short, vicious August 2008 war that Armenia’s president (Serzh Sarkisian) invited his Turkish counterpart (Abdullah Gül) to visit Yerevan to attend the scheduled football match. This in turn ignited a chain of intensive consultations and rumours, including about an early reopening of the border. The next, and sudden, breakthrough occurred on 23 April 2009 – the eve of the day each year when Armenians commemorate the genocide – when Turkey and Armenia along with their Swiss mediators announced a "roadmap" towards normalisation.

This announcement also allowed Barack Obama in his 24 April address to use the term meds yeghern and thus avoid the juridical meaningful "genocide" – thus in effect retreating from his campaign promise. In the ensuing weeks Ankara also took a step back and insisted that the opening of borders could not take place before the solution of the Karabakh conflict – a clear concession to Azerbaijani interests. Now, with the protocols (which have to be ratified by the respective parliaments before they come into effect) Turkey can continue to press Armenia by saying that the process will be halted unless there is "progress" on the Karabakh issue.

The four-page text agreed on 31 August 2009 – the basis of the 10 October accords – made reference to recognising the "existing borders": a hint in the direction of the Kars treaty. But the real disaster lies in the pledge to "implement a dialogue on the historic dimension with the aim to restore mutual confidence between the two nations, including an impartial scientific examination of the historical records and archives to define problems and formulate recommendations".

This is the equivalent of a coup d’état by diplomats and politicians over the work of historians. This is not these gentlemen’s job; the best they can do is to regulate the political problems between their two states, and leave study of the historic records – opened to all – to scholars. It is a bitter twist that two days before the protocols were signed, Turkey’s supreme court of appeals found that the Nobel literature laureate Orhan Pamuk can be sued for an interview given to the Swiss newspaper Tages-Anzeiger in which he said "30,000 Kurds and a million Armenians have been killed and almost nobody dares to mention that."

The Armenian foreign ministry says that the protocols do not include preconditions, especially over the main Turkish demand that opening the borders should be linked to progress over the Karabakh conflict; and that therefore the accords are a great success for them. But the protocols do refer to the Kars treaty, and satisfy Turkey’s key aim of deflecting or halting the process of international recognition of the genocide. For it is all too predictable that in future Obama or his European counterparts will refrain from use of the term "genocide" on the grounds that the two sides are engaged in sensitive negotiations and thus it is better not to disturb them.

Thus, the way the protocols indirectly put the genocide on the negotiating table allows Turkey to win twice: by creating a process that deters foreign powers from intervening and putting pressure on Turkey, and by granting Turkey the formal possibility of questioning the genocide.

The leading genocide scholar Roger W Smith  has written an open letter to the Armenian president, which says: "Scholars have identified the Armenian genocide as the archetypal case of modern genocide, whose pattern has many similarities with subsequent cases. Therefore, any commission that purports now to conduct ‘an impartial scientific examination of the historical records and archives’ in effect dismisses all of the extensive research that has already been conducted for decades and implies that none of it was impartial or scientific. This is offensive to all genocide scholars, but particularly non-Armenian scholars, who feel their work is now being truly politicised."

He concludes: "the scholars are concerned that a historical commission would embolden those who would consider perpetrating genocide in future years by showing how easily genocide can be relativised, especially by the powerful."

The deal of 10 October 2009 entails that several intergovernmental commissions will be assigned to study Armenian-Turkish relations in such areas as economy, trade and culture (including, for example, the fate of thousands of Armenian churches and cultural monuments in Turkey), as well as the events of 1915 and after. The two countries’ diplomats will need to agree on 4,000 pages rather than just the four of the protocols. It is a recipe lacking the key ingredient: a recognition by Turkey of the dark pages of its own history. 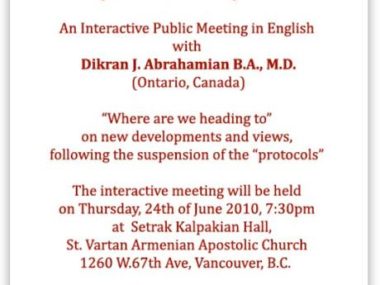 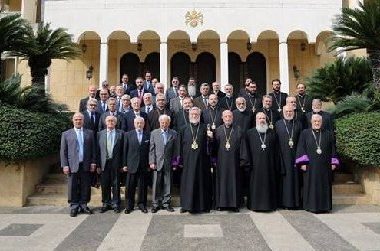