Countdown to the Next Artsakh War

Meeting at the White House with a group of Armenian Americans, the chief U.S. negotiator for the OSCE peace talks on Artsakh (Karabagh) announced that the United States would be satisfied if a peace agreement were to last for only 10 years.

The official was Joseph A. Presel. It was 1996, and Bill Clinton was president. I happened to be at that meeting.

With Presel were Richard Morningstar, U.S. special envoy to the newly independent states of the Caucasus, Caspian, and Central Asia, Nancy Soderberg of the National Security Council, and others. A key U.S. objective, Soderberg declared, was to pump the region’s oil and gas resources west through U.S. sponsored pipelines.

Meeting at the White House with a group of Armenian Americans, the chief U.S. negotiator for the OSCE peace talks on Artsakh (Karabagh) announced that the United States would be satisfied if a peace agreement were to last for only 10 years.

The official was Joseph A. Presel. It was 1996, and Bill Clinton was president. I happened to be at that meeting.

With Presel were Richard Morningstar, U.S. special envoy to the newly independent states of the Caucasus, Caspian, and Central Asia, Nancy Soderberg of the National Security Council, and others. A key U.S. objective, Soderberg declared, was to pump the region’s oil and gas resources west through U.S. sponsored pipelines.

While commenting on the OSCE negotiations, Presel made an astonishing remark, which I paraphrase: ‘Even if a peace agreement between Armenians and Azerbaijan over Karabagh were to last just 10 years, that would be sufficient.’

Did Presel mean that Washington would risk a quick fix for Artsakh even if it were likely to result in a medium-term renewal of violence? I believe so, and the reasons are clear.

Like Georgia, Armenia sits in a strategic position between energy-rich Azerbaijan (and the Caspian Sea) and NATO member Turkey.

An Artsakh peace accord would lead Azerbaijan, and probably Turkey, to reopen their borders with Armenia. That, the U.S. State Department hopes, would eventually result in Armenia’s serving American interests as a land, air, and gas and oil pipeline corridor between Azerbaijan and Turkey.

None of that will happen without an Artsakh peace accord. But it need last just long enough for the U.S. to gain an economic and political foothold in Armenia. Such a foothold would take several years, which explains Presel’s 10-year timeframe.

Why did Presel, an experienced diplomat who had served in Turkey and Russia and was soon to be the ambassador to Uzbekistan, make such a damning disclosure about State Department strategy?

I don’t know. It was early in the morning, and Presel looked very tired. Perhaps fatigue caused him to let his guard down.

With Presel’s 10-year timeframe in mind, consider the OSCE peace plan for Artsakh that Washington, Paris, and Moscow have proposed.

The plan would, for instance, allow thousands of Azeris to resettle in Artsakh. Even Armenia has apparently fallen for this pseudo-humanitarian proposal.

Azerbaijan will ensure that the resettlers include plenty of spies, saboteurs, and provocateurs. Their job? To sow discord over property rights, school curricula, military service, alleged discrimination, and any other pretext they can dream up. The resulting disorder or civil war would give the OSCE and Azerbaijan an excuse to cancel the referendum that would supposedly decide Artsakh’s final legal status.

Claiming that Armenians were brutalizing its kin, Azerbaijan – armed with advanced weapons bought with billions in oil and gas revenue – could well launch a massive assault. Azerbaijan has always preferred reconquest over peace.

Even if the resettled Azeris lived peacefully, their higher birth rate would ensure their eventually outnumbering Armenians.

Under either scenario, Armenians could lose Artsakh permanently.

Would the United States (and Europe) really be unconcerned if an Artsakh peace fell apart after 10 years or so? It depends.

If western-bound pipelines passed through Armenia, or if a new war jeopardized the existing Azeri pipelines that lie just north of Artsakh, Washington and Europe would oppose a new war by Azerbaijan. It’s unclear, however, that they would have sufficient leverage over Baku to enforce their will.

Conversely, if their interests were not threatened, the U.S. and Europe might not particularly care if Azerbaijan reconquered Artsakh. Russia might actually welcome a new war by Azerbaijan if it concluded that an Armenian counterattack would damage western-bound pipelines.

The major powers could prove to be greater enemies of Artsakh than is Azerbaijan.

Would Armenia ever agree to a deeply flawed peace plan for Artsakh designed by the U.S., France, Europe, and Russia, all of whom have historically lied to and betrayed Armenians? Probably.

Inexplicably, Armenian governments have rarely, if ever, publicly reminded these countries of their treachery. Brought up in the denationalized Soviet educational system, Armenian leaders may be largely unaware of the details of that treachery.

Moreover, Armenia’s recent accord with Turkey – the so-called “protocols” which tend to cast aside Armenian historical rights and may make the factuality of the genocide debatable – demonstrates that its leaders are poor negotiators and more concerned with lining their pockets than heeding the views of their people.

Despite Presel’s eye-opening revelation, unintentional or otherwise, about a short-term fix for Artsakh, Armenians should know that he also reflects the State Department’s doubletalk about the Armenian genocide.

At the White House, Presel referred directly to the Armenian genocide, saying, ‘I don’t know why Turkey doesn’t just acknowledge it.’ The statement was strangely disingenuous. Presel had, after all, served in Turkey and certainly knew of Ankara’s fear that a genocide acknowledgment could advance long-standing Armenian claims to territory and reparations.

Fast forward to several years ago. Presel was on a panel that discussed Armenian – Turkish relations. He reportedly endorsed Turkey’s denialist stance that the 1915 killings were not genocide but rather were caused by Armenian rebellions.

Regardless, Armenians must take Presel’s “10-year” warning seriously. There is no reason to believe that the State Department’s policy is any different now than when he said it.

When a “peace” agreement on Artsakh is signed, start counting.

David Boyajian is a freelance writer. Many of his articles and interviews are archived on Armeniapedia.org. 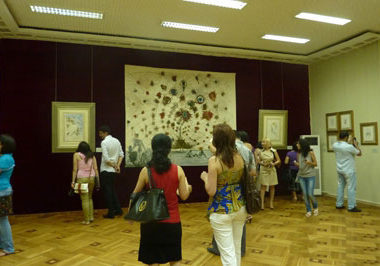 Read More
Keghart.com Editorial Board, 16 May 2012 A good breakfast is the most important meal of the day, doctors…
Read More
0
0
0

Read More
Keghart.com Editorial Board, 16 January 2011 On a number of occasions, since its inception three years ago, Keghart.com…
Read More
0
0
0

Read More
By Dr. Henry Astarjian,The Armenian Weekly, 24 June 2011 In recent years converted Armenians have been under the…
Read More
0
0
0