“While many technological measures
can be taken to secure safety at nuclear
power plant, such measures on their
own cannot cover great risks”.
Naoto Kan, ex-prime minister of Japan

I was having a casual conversation about Azerbaijan’s recent military aggression against Armenians with my house-sitter in Yerevan. Despite the fact that it’s a nice apartment with modern amenities and in the center of the city, she said she was wondering whether to stay in Yerevan or move to a place far from the Medzamor Nuclear Power Plant (M-NPP). She was, of course, worried Azerbaijan would blow up the M-NPP.  Her concern is most likely shared by many in Armenia. Armenians around the world should appreciate the fear gripping their brothers and sisters in our homeland. It’s high time for the Diaspora to work with Armenia to put an end to the threat.

Azerbaijan launched its unprovoked military offensive against Tavush on July 12. It was the heaviest shelling since the so-called “4-Day War” of April 2016. The enemy was attempting to destroy Armenian military positions as well as target the civilian population in villages and towns along the demarcation line. Their aim was to force Armenia to hand Artsakh.

On July 17, TASS reported that Vagif Dargyahly, head of press service at Azerbaijan’s defense ministry, had warned: “The Armenian side should not forget that the new missile systems that are in the arsenal of our army make it possible to launch high-precision strikes at the Medzamor nuclear power plant, which could lead to a great catastrophe for Armenia.” Indeed, it would unleash a devastating loss of many Armenian lives. Prime Minister Nikol Pashinyan countered: “Azerbaijan’s announcement of striking Medzamor Nuclear Power Plant is [a] crime against humanity.”

Some might consider the threat idle or patented barking. However, the consequence of such an event is too costly to ignore. Thus, three projects should be undertaken on the double: report the threat to the international authorities as a terrorist act and to condemn Azerbaijan for its criminal intent and warn Baku of the dire consequences of such a criminal act—especially since Armenia may retaliate in self-defense to establish a long and wide buffer zone deep into Azerbaijan territory. The second is to find ways for additional fortification of the M-NPP against military attack. The third is to mobilize the Armenian nation to avoid becoming a sitting duck to Azerbaijan’s savagery.

I shall address the third project of mitigating and eventually rescuing Armenia from the imminent danger through the decommissioning of the M-NPP which is 36 k west of Yerevan and 25 k from the Turkish border.

The threat to the plant is the sword of Damocles over Armenia’s head. The perpetrators of the Armenian Genocide (1915-1923) would be committing “nuclear genocide” of Armenians in Armenia if they bombed Medzamor.

In the early 1970s, when other Soviet countries in the South Caucasus refused to have a nuclear plant built within their territories, Armenia acquiesced to the building of a nuclear plant. The plant provides 40 percent of Armenia’s electricity needs. The electricity is also sold to Iran and Georgia.

As long as Mount Ararat remains captive, as long as Artsakh maintains its sovereignty, Turkey/Azerbaijan and Armenia will be in a war of attrition.

To say that M-NPP is Armenia’s Achilles heel is no exaggeration. It would only take another savage officer of the Azerbaijani armed forces, such as Ramil Safarov, to send a drone to drop a bomb on the nuclear facility to create the apocalyptic disaster in Armenia. So let us get our act together and work to eliminate this specter from hovering over our heads.

Based on extensive study, here is my step-by-step approach to dismantling M-NPP without creating an energy shortage meanwhile protecting the facility from the enemy’s brutality:

Step One: Armenia and its vast Diaspora should establish a not-for-profit organization to dismantle M-NPP. While Armenia has many experts in the nuclear sciences, so does the Diaspora. We have the dedicated experts who can cut the prohibitive cost of decommissioning a nuclear plant. When Armenia asks for help, the experts in the Diaspora should rise to the occasion and help the homeland.

Step Two: Stop all plans to modernize the M-NPP which would lengthen or complicate the process of decommissioning. Either we remain vulnerable to the enemy by keeping M-NPP for the sake of cheap energy or get rid of it for national security.

Step Three: Before we embark on the time-consuming and costly project of dismantling the M-NPP, Armenia should find an alternative source of energy.  One way would be hydroelectric generation; another would be solar energy or wind turbines. We can also harness Arpa River or another high volume, rapidly moving river by damming it to produce electricity.

Step Four: Since decommissioning the M-NPP will take many years, and since Armenia is facing a belligerent foe and its big brother Turkey, temporary protection measures should be taken. One way would be to encase the facilities with thick concrete wrap around for protection from aerial and land attacks.

Step Five: Choose a dismantling method, which would take less time, less money, fewer safety problems, and without a major disruption in the use of electricity. When the decision is made to close a nuclear power plant, the facility must be decommissioned by safely removing it from service and reducing most residual radioactivity to a level that permits release of the property safely. Decommissioning rules involve cleanup of radioactively contaminated plant system and its structures, and the removal of the radioactive fuel. These requirements are to protect workers and the public during the decommissioning process.

For decommissioning, there are three strategies: DECON (decontaminate), SAFSTOR (store safely), and ENTOMB (bury or encase completely). Let us briefly introduce each one.

DECON (also referred to as Immediate Dismantling). Soon after the nuclear facility closes, equipment, structures, and portions of the facility that contain radioactive contaminants are removed or decontaminated to a level that permits release of the property as safe. Although the operation stops immediately, the safe disposal of radiation takes many years.

SAFSTOR (also known as Deferred Dismantling). A nuclear facility is maintained and monitored in a condition that allows radioactivity to decay. Afterwards, the plant is dismantled and the property is decontaminated.

ENTOMB. Radioactive contaminants are permanently encased on site in structurally dependable or sound material such as concrete. The plant is maintained and monitored until the radioactivity decays to a level permitting restricted release of the property. While the facility may stand some enemy attacks, it may be vulnerable to severe earthquake.

The adoption of a combination of DECON and SAFSTOR. The combined strategies allow some portions of the facility to be dismantled or decontaminated while the other parts of the facility are left in SAFSTOR. The decision may be based on factors besides radioactive decay, such as on the availability of waste disposal sites and the circumstances that allow following this strategy.

However, if Armenia is under attack, the ENTOMB strategy would give the country some protection by encasing the plant facilities with thick concrete. The ENTOMB fortification is considered effective against earthquake and missile attacks. This kind of strategy is less time-consuming, less expensive, and immediately meets the exigencies of the situation while facing an enemy that has a long track record of committing barbarous acts.

On the average, decommissioning can be completed within 60 years of the plant ceasing operations. A time beyond that would be considered only when necessary to protect the public health and safety. To fully decommission M-NPP, the facility must be decontaminated and the site returned to “Greenfield” status (i.e. the site is safe for reuse for recreation, housing, farming, or industrial use).

Armenia must safely dispose of any on-site nuclear waste and remove carefully or contain any radioactive material, including nuclear fuel as well as irradiated equipment and buildings.

Step Six: Establish an M-NPP Dismantling Fund to bankroll such a costly project. The Diaspora should form a special fund and organize fund-raising efforts on a regular basis. The government of Armenia should also levy a small tax to contribute financially to make Armenia free of nuclear reactors. The cost of decommissioning a nuclear power plant runs from many millions to a billion dollars.

Step Seven: Dismantle secretly and keep plant stacks intact from outside. So if Azerbaijan strikes, we would catch it red-handed and with evidence. We would then have a good reason to occupy (liberate) our Utik province from Azerbaijan as buffer zone.

Step Eight: Establish a timeline to complete such a crucial project. It takes anywhere from 20 to 100 years to complete the decommissioning and for getting rid of the nuclear waste. Armenia is small; we do not have the luxury of vast stretches of desert to bury nuclear waste that is active. Incidentally, Armenia should also ban Russia from dumping waste or decayed radioactive material in Armenia. To achieve complete success, Armenia will have to reach the “Greenfield” stage in dismantling, namely rendering the environment conducive to living and agriculture by humans as well as animals. With the help of the Diaspora, it would most likely take 40 years to get rid of the looming danger of M-NPP.

Since 2013, six commercial nuclear reactors in the United States have shut down. Additionally, eight reactors have announced plans to retire by 2025. The world trend is to get rid of this paradoxical source of energy which benefits and destroys humanity and the environment.

In an era of technology-based warfare, conventional combat seems an anachronism. Rules of engagement are from a distance such as by robots, missiles, and drones. Military manufacturers, such as Boston Dynamics in the United States are specializing in unmanned machinery to minimize war casualties. Armenian soldiers are not facing a traditional battle. Equipped with unmanned arms to strike from a distance, the enemy can neutralize the bravery of our soldiers.

If we lose the war gradually our soldiers should not be blamed. The lion’s share of responsibility would fall on our shoulders: we have to equip our troops with modern weaponry and to safeguard our population from the explosion of the nuclear power plant.

Armenians are living in the shadow of a potentially disastrous power plant.  In addition to Azerbaijan’s threats the power plant is vulnerable to strong earthquake. We should organize and solve our nuclear vulnerability without wasting time.

We owe it to our future generations to guarantee an Armenia that is clean, beautiful, strong, and safe. And yes, to alleviate my house-sitter’s fears of an explosion at Medzamor.

Steam rises from the cooling towers of M-NPP station in Armenia. Its location in a seismic zone has drawn renewed attention since Japan’s Tahoka earthquake (March 11, 2011) Tahoka which sent a message to countries with nuclear power plants to assess their situation. 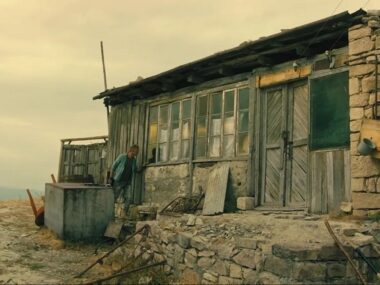 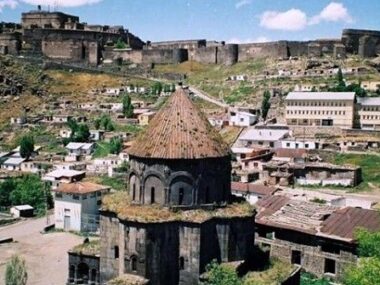 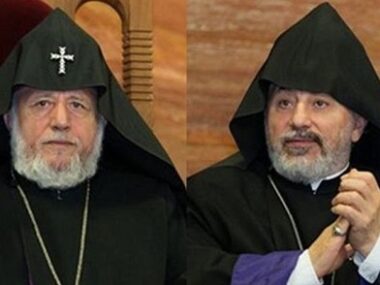