Erdogan’s Message: Where Do We Go from Here?

On April 23, 2014, Turkish Prime Minister Reccep Tayip Erdogan sent a message of condolence to the Armenians worldwide, in eight

languages, for their forefathers who lost their lives in 1915. As this was an unprecedented and unexpected gesture by a Turkish statesman, Armenians in Armenia, Diaspora and within Turkey reacted with a wide range of emotions and opinions. Some dismissed it as a cynical move and a new version of continued denial of the Genocide; some saw it as a smart political move and an effective delay tactic to avert the pressures of the upcoming centennial of the Genocide next year; others optimistically saw it as a change in direction by Turkey in facing its history, hoping for increased dialogue and resolution of issues, and a few sycophants went as far as taking out newspaper ads thanking the prime minister, or suggesting that he be made a candidate for Nobel Peace Prize. I would like to share my thoughts about his message, and more importantly try to deal with the question: Where do we go from here?

On April 23, 2014, Turkish Prime Minister Reccep Tayip Erdogan sent a message of condolence to the Armenians worldwide, in eight

languages, for their forefathers who lost their lives in 1915. As this was an unprecedented and unexpected gesture by a Turkish statesman, Armenians in Armenia, Diaspora and within Turkey reacted with a wide range of emotions and opinions. Some dismissed it as a cynical move and a new version of continued denial of the Genocide; some saw it as a smart political move and an effective delay tactic to avert the pressures of the upcoming centennial of the Genocide next year; others optimistically saw it as a change in direction by Turkey in facing its history, hoping for increased dialogue and resolution of issues, and a few sycophants went as far as taking out newspaper ads thanking the prime minister, or suggesting that he be made a candidate for Nobel Peace Prize. I would like to share my thoughts about his message, and more importantly try to deal with the question: Where do we go from here?

One can find many faults with Erdogan’s message. One can interpret it as a message addressed to the ‘dead’ victims of a natural disaster such as an earthquake or flood, or a man-made accident such as a train accident, instead of ‘murdered’ victims of a state-planned annihilation of an entire people that has disappeared from its 4,000-year-old historic homeland. One can speculate about the reasons for Erdogan to send such a message – whether cynical, calculated, insincere, or even perhaps pressured by the US, so that President Barak Obama will not start using the ‘G’ word. But at the end of the day, no matter what the motive, whether genuine or not, one must acknowledge that this is the first time a Turkish leader has said something mildly humane about the Armenian Genocide victims of 1915, instead of complete denial or insults that have been the norm for the past 99 years. More significantly, certain terms used in the message are encouraging, welcome and irreversible, such as acknowledging the historic significance of April 24 for all Armenians around the world, or acknowledging the inhumane consequences of the 'relocation'. And therefore, the message must be recognized as a step in the right direction–PROVIDED that it is followed immediately by real, concrete action and further evidence of change of direction toward facing history, justice and restitution. The next twelve months will tell if this is the case or not.

It is not easy for a statesman to suddenly reverse a century-old course, brainwashing of its citizens for four generations, threats against anyone or any state which disagrees with its lies about 1915. But every journey of ten thousand miles starts with a small step. In a previous article I had suggested eight steps that can be taken by Turkey within the next year, immediately and without even acknowledging the Genocide, if indeed there is goodwill toward resolving historical wrongs, which are the following:

1. Open the border with Armenia without any preconditions. Rename the Alican border-crossing the Hrant Dink Gate, in honor of the heroic advocate for dialogue.

2. Grant citizenship to all living descendants of the deported Ottoman-Armenian citizens.

3. Clean up the textbooks at all levels of the educational system by eliminating the falsifications, hate-mongering, and discrimination against the Armenians, and start teaching the correct facts about 1915.

4. Initiate a state program by the Ministry of Culture and Tourism to reconstruct or restore more than 2,000 destroyed or deteriorating Armenian monasteries and churches, and return them to their rightful owner, the Armenian Church (Istanbul Armenian Patriarchate).

5. Offer a symbolic but meaningful apology to the Armenian people for all the crimes of 1915, by returning Mount Ararat and Ani to Armenia, perhaps as part of a minor border revision and territorial exchange based on equivalent land area.

7. Allow the compensation cases by descendants of Ottoman-Armenian citizens to proceed in Turkish and international courts.

8. Offer free transit and duty-free port facilities for Armenia at a Black Sea city such as Trabzon and Rize, as partial compensation for the economic losses of Ottoman-Armenian citizens.

I am aware that some of these steps are already taken or being considered by Turkish government officials. Discussions about granting of citizenship and restoration of a few of the churches and monasteries have started– albeit as museums, or without mentioning their Armenian origins. Opening the border with Armenia without being held hostage by third countries would be a win-win for both states. A sure sign whether Erdogan’s message is sincere or not would be eliminating the names of streets, schools, mosques and neighborhoods, named after Ittihad Terakki leaders–Talat, Enver or Djemal. But we know there are still Turkish ‘deep state’ leaders recently released from jail by Erdogan, who have formed Talat Pasha Committees, or erected statues of noted murderers such as Topal (Lame) Osman, famous for throwing Armenians overboard from boats into the Black Sea, or for throwing Pontic Greeks into the boiler rooms of ships through the funnels. Another indication whether Erdogan is serious in changing direction would be to stop the ridiculous publications and conferences of the state-financed Turkish Historic Society. Their latest publication had the number of Armenians perished during 1915 reduced down to 8,000, who had all ’died due to illness’. Their latest conference in Van in April 2014 where 35 so-called professors presented papers, was attended by only seven persons; one of the papers in all seriousness claimed that the 235 intellectuals arrested on April 24, 1915 were all very well treated, well fed and cared for in Ayas and Cankiri, and all returned to Istanbul within a few months, ‘without even a tiny scratch on their bodies’. Finally, Erdogan must understand that there is no need to assemble an international historic commission to prove the veracity of the 1915 events – this has already been done by scholars worldwide from Ottoman Turkish and international archives. If the Turkish objective of the historic commission is to prove that Armenians were indeed fomenting rebellion, and thereby to justify the decision of relocation and wholesale massacres, these are already documented and open in Armenian and international archives. And yes, there have been localized revenge massacres of Muslims by Armenian volunteer troops entering Anatolia with the Russian army in 1916, but after the 1915 Genocide had already taken place. He can assemble a commission within Turkey, as there are now enough credible and serious Turkish scholars who can overcome the lies spread by the state-sponsored lackeys at the Turkish Historical Society. Instead, he must understand that there are still critical Ottoman Turkish archives are not open, and authorize opening still hidden 1915 deportation/liquidation records from 33 Ottoman provinces, as well as the Ottoman property deed records, still banned by the Turkish Army Chief of Staff. Yes, there is a need for an international commission, not to establish the truths of 1915 but to deal with the consequences of the 1915 truths and restitution of justice.

Of course it is essential for Erdogan and the Turkish state to deal correctly with the trauma and pain of the ‘murdered’ and not ‘dead’ victims of 1915, as he referred to in his message. But the issue is much more than that. There is the bigger issue of a massive plunder, transfer of wealth, land and assets resulting from the murder of these victims. If the Turkish or Kurdish grandfathers in Turkey are guilty of murder, the leaders today, their grandchildren, are guilty of not only the denial of the murders, but more importantly, guilty of enjoying from the proceeds of the crimes, benefiting from the continued possession of the stolen wealth, land and assets. The President of the Turkish State today resides in the home of the Kasapyan Armenian family. A well-known Turkish newspaper editor owns the historic Varakavank Monastery near Van, and the entire village where Armenians lived until 1915. The Turkish State now owns the land and whatever is left standing on it, belonging to more than 4,000 Armenian churches and schools active before 1915. The Turkish and Kurdish notables have seized and still possess hundreds of thousands of houses, shops, stores, farms, orchards, vineyards, factories, warehouses and mines owned by the Armenians before 1915. This massive plunder is not the result of a state invading and conquering a foreign state during a war, but it is because a state decided to murder its own citizens and take possession of these citizens’ assets, followed by a series of legislation to legalize the robbery. This issue has nothing to do with whether the murders are defined as ‘genocide’ or not, and must be addressed by the Turkish State regardless, through revised legislation and return of the assets to the rightful owners and heirs.

While Erdogan and Turkish leaders have a lot of work to do to clean up the past, Armenians cannot afford just to meet among themselves or expect third-country politicians to take up their cause for them. As an advocate of direct dialogue with our adversaries, I suggest increased contact with Turks, Kurds and the new emerging reality of hidden Armenians, toward building trust, understanding and a common ‘body of knowledge’. Armenian opinion-makers, media, academia, lawyers, artists, filmmakers, engineers and architects, NGOs and organizations must make contact with their counterparts in Turkey through conferences, cultural events, media and student exchanges, reconstruction projects and jointly organized April 24 commemorations within Turkey. Thanks to the continuing efforts of a few of these individuals and initiatives, the number of opinion makers and democratically open-minded people who have become aware of the truths of 1915 in Turkey is growing dramatically. We are all aware that the problem is within Turkey but we should all realize that the solution will also be within Turkey. It is our hope that Erdogan’s message is a real step in the right direction, to be proven only if immediate deeds as described above follow the words. 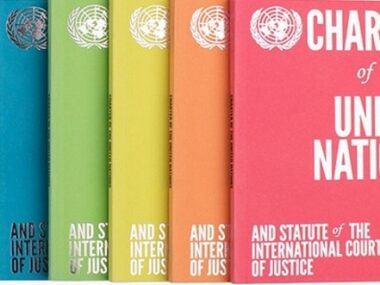 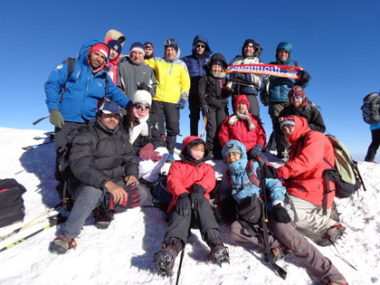 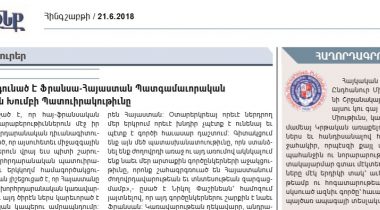