Here are ten such salient facts.

The name is wrong. The actual name of the cathedral is Sts. Jameses because two saints bearing that name are buried in the cathedral. The first is St. James (known as ‘Klkhatir’ to Armenians), the brother of St. John. The second is St. James, the brother of Christ. He was the first bishop of Jerusalem. The “first” St. James was beheaded by Herod Agrippa. While his head is buried in the cathedral, the rest of his body is in distant Santiago de Compostella in Galicia, in northwest Spain. How the saint’s body wound up in that remote spot is another story, if not fable and legend. The “St. James” is popular because it’s easier to pronounce and to write than Sts. Jameses.

Here are ten such salient facts.

The name is wrong. The actual name of the cathedral is Sts. Jameses because two saints bearing that name are buried in the cathedral. The first is St. James (known as ‘Klkhatir’ to Armenians), the brother of St. John. The second is St. James, the brother of Christ. He was the first bishop of Jerusalem. The “first” St. James was beheaded by Herod Agrippa. While his head is buried in the cathedral, the rest of his body is in distant Santiago de Compostella in Galicia, in northwest Spain. How the saint’s body wound up in that remote spot is another story, if not fable and legend. The “St. James” is popular because it’s easier to pronounce and to write than Sts. Jameses.

The first known monument to the Unknown Soldier was built by the Armenians in the city’s Musrara neighborhood, northwest of the city walls. It is located in the funerary chapel of martyr St. Polyeucte, an Armenian officer of the Roman XII legion. The 6.30 meter by 3.90 meter mosaic is made up of forty medallions which contain storks, partridges, geese, ibis, eagles, and ostriches and interspersed flowers. The mosaic includes, in Armenian, the inscription: “To the memory, and for the salvation, of all those Armenians whose names are known to the LORD.” It’s believed the mosaic was made sometime between 527 to 565 in the age of Emperor Justinian of Byzantium.

3.THE CITY WALL WAS BUILT BY AN ARMENIAN

Maymar Sinan (1489-1588), the Armenian engineer-architect from the Agirnas village near Caesarea, was responsible for building the wall. As chief architect of the Ottoman palace, he was in charge of the construction of more than 300 structures—mosques, hospitals, public kitchens, schools, mausoleums, baths, palaces, mansions, bridges, aqueducts, and caravansaries. He circled (in the mid-1530s) Jerusalem with the 4 kilometer walls including 34 watchtowers and seven gates.

For centuries the Turks denied Sinan’s Armenian origin. In recent years they’ve somewhat relented and say that he was Christian. Evidence that Sinan was Armenian is the letter he wrote to the sultan asking him not to exile his family to Cyprus when the Turks were shipping the Armenians of his hometown to the Mediterranean island.

At the main entrance to the Armenian Convent there’s an Arabic writing etched in stone. It’s a declaration which guarantees the integrity of the Armenian holy places and exempts Armenians from head tax. Many people, including professional guides, wrongly believe the words are those of Prophet Mohammed granting protection to the Armenians of the Holy Land. Others believe the words belong to Omar Ibn-Khattab, the conqueror of Jerusalem. Still others maintain that Salah Eddin Ayoubi or Ottoman Sultan Abdul-Aziz is the author of the decree. However, the actual guarantor was Egyptian Sultan al Zaher Abou Said Chakmak (1437). Some scholars believe he was of Armenian origin and was related to Armenians who were prominent in the Fatimid dynasty of Egypt.

Although Queen Melisende of Jerusalem, the greatest Crusader female personality, had an Armenian mother and strengthened the Armenian presence in the Holy Land, few people know about her or that she is buried in the Church of Virgin’s Tomb (“Asdvadzamayr” in Armenian), adjacent to the Garden of Gethsemane. Her mother (Queen Morphia, the second Armenian queen of Jerusalem) is also buried in the underground church at the foot of Mount of Olives. Queen Melisende was born (1105) and raised in Urfa/Edessa. She came to Jerusalem with her family at the age of ten when her father, the ruler of Urfa, became King Baldwin II, the second Crusader king of Jerusalem. Her mother tongue was Armenian and she received Armenian upbringing while in the Armenia city of Urfa.

Queen Melisende was the eldest of four sisters. She was tall, had dark eyes and brows. She was described by a contemporary chronicler as “beautiful, wise, sweet and compassionate”. Others described her as a willful ruler who didn’t suffer fools gladly. She was passionate about horse riding and was resented by some Crusaders because of her gender and her half-Armenian origins. While married to Count Fulk, she shared the throne with her husband. After the early death of her husband during a hunting accident, she became regent and sole ruler.

A talented diplomat, she avoided conflict with Muslims. She was interested in the arts and in urban development. The Holy Sepulcher was reconstructed through her intercession. She also built the Bethany Abbey for nuns, the St. Anne Church, three covered bazaars, and a scriptorium for the production of illuminated manuscripts. She was also instrumental in the expansion of the Armenian Quarter. Melisende spread her influence through the arranged dynastic marriages of her two sisters to Crusader royalty. She died in 1161 following a stroke.

6.WHEN WERE THE ST. JAMES CATHEDRAL AND CONVENT BUILT?

The original cathedral, which was destroyed by the Persians in the 7th century, was built in the 4th century. The present building dates from the Crusader era and is in many ways a replica of the Haghpad Cathedral in Armenia. The convent’s roots also go back to the Crusader era. However, most of the convent land were acquired and developed in the 17th and 18th centuries through the donations of wealthy Armenians in the diaspora and pilgrims. A number of prominent buildings (Gulbenkian Library, Sts. Tarkmanchats Secondary School, Jarankavorats, the defunct printing press) were built in more recent times. The seminary, across from the main entrance to the convent, was built in the 1970s.

Why do Armenians of Jerusalem celebrate Christmas on Jan. 18 when the Armenian Apostolic Church celebrates that feast on Jan. 6? Depending on the source, there are two answers: the Armenian Church of Jerusalem uses a different church calendar from that used by the Armenian Apostolic Church. The second explanation? There was a time, nearly two centuries ago, when Jerusalem Armenians and the local Greek Church celebrated Christmas on Jan. 6. This resulted in huge crowds of pilgrims (Armenian, Greek, and Russian) crammed, at the same time, in the Nativity Church to celebrate Christ’s birth. The simultaneous celebrations resulted in a cacophony of competing hymns, discomfort for all and in the occasional fight. To resolve the problem, the Armenians delayed their celebrations to Jan. 18 but in lieu received certain rights from the Greek Patriarchate.

The Latin (Catholic) Patriarchate of the Holy Land has a distinctive cross which is known as the Jerusalem Cross. It comprises of a square cross with four smaller crosses over and below its horizontal arms. Although the Catholic Patriarchate has made it its “logo”, the cross is of Armenian origin.

In Eastern Armenia, long before the arrival of the Crusaders to the Middle East, Armenians etched the identical cross on rocks, churches and monastery walls. The four small crosses symbolized the four disciples who wrote the New Testament. These ancient crosses can still be seen in the Republic of Armenia. When following the Seljuk invasions a significant percentage of Armenians moved to Cilicia, they took the cross design with them. A number of Armenian Cilician noblemen adopted it as their flag. The Crusaders saw the cross while passing through Cilicia on their way to the Holy Land. After conquering Jerusalem, they declared it their flag. In time the Latin Patriarchate of Jerusalem appropriated the cross as its own.

Another proof of the cross’s Armenian roots: across from the entrance to the Sts. Jameses Cathedral, visitors can see more than half-dozen khachkars (stone-crosses) embedded in a high wall. They have four small crosses around them. One of these khachkars has A.D. 965—more than 130 years before the arrival of the Crusaders to Jerusalem.

The second-largest collection of Armenian illuminated manuscripts is at the modest St. Thoros Church located in the lay residential district of the Armenian Convent. The 4,000-manuscript collection, which includes works by such masters as Toros Roslin and Sarkis Pitzak, is the second-largest after the one in Yerevan (10,500). At one time there were 100,000 Armenian illuminated manuscripts: most were burned by the Turks.

10.THE LAST QUEEN OF ARMENIA

After the fall of Sis in 1375, King Levon V (the last king of Armenia), his family and his retinue were taken prisoners by the Memluks and incarcerated in Egypt. Years later, when several European noblemen paid the ransom demanded by the Memluks, King Levon was released. After acting as governor of Madrid for a few years, he settled in Paris as a permanent guest of the king. During the years King Levon was incarcerated in Egypt, his wife Mariyoon (the last Armenian queen) and daughter Penna settled in the Armenian Convent of Jerusalem where they died a few years later. They were buried side by side, next to the pillar facing the chapel of St. James (“Klkhateer) northwest of the cathedral.

During his “retirement”, King Levon tried to arrange peace between France and England hoping to launch another Crusade after the two neighboring countries had made peace. But the kings of France and England were not interested in a peaceful solution to their conflict. King Levon died in 1393 in Paris and was buried in the same mausoleum where French royalty were buried. After the French Revolution, the royal remains were reburied at the St. Denis Cathedral outside Paris.  More than a century after King Levon’s death, King James I of England, who was a distant relative, acquired the title of “King of Armenia”. 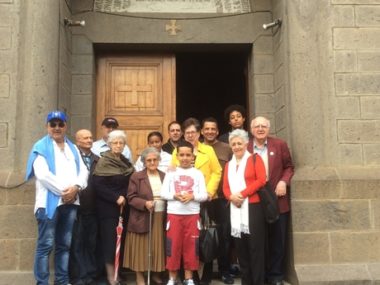 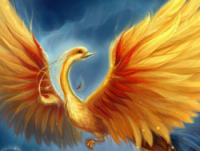 Read More
Berge Minassian MD, Toronto, 17 October 2016 A week ago, in a call-to-action article titled 'YOU Can Bring Back…
Read More
0
0
0 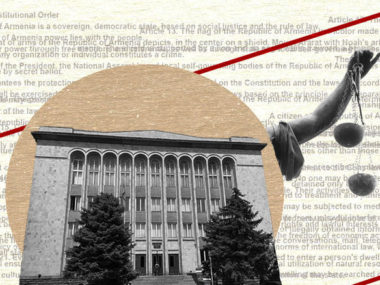 Read More
Karen Mkrtchyan, Yerevan, 16 June 2020 This article was written prior to the declarations of the opposition parties.…
Read More
0
0
0