This story began with a suspect memory and perhaps a vague word or two which had remained dormant in my mind for 48 years before popping up recently.

Back in 1967, while enjoying the hair-raising rides, the butter-doused corn on the cob, and the razmataz of the fairway at Toronto’s Canadian National Exhibition, I had stopped—to escape the din–at an ornate jewel of a building where they were showing black-and-white  photographs of dramatic events in Canada’s history. Although the room was packed, it was hard to miss the tall and lean man with the debonair black mustache. He seemed to flow in the crowd in non-stop motion as he shook hands and smiled with his sad eyes. He was the star of the show: the photos were taken by him. His name was Roy Tash. I left the exhibition with an inchoate feeling that he might be Armenian, despite his name. I soon forgot him.

This story began with a suspect memory and perhaps a vague word or two which had remained dormant in my mind for 48 years before popping up recently.

Back in 1967, while enjoying the hair-raising rides, the butter-doused corn on the cob, and the razmataz of the fairway at Toronto’s Canadian National Exhibition, I had stopped—to escape the din–at an ornate jewel of a building where they were showing black-and-white  photographs of dramatic events in Canada’s history. Although the room was packed, it was hard to miss the tall and lean man with the debonair black mustache. He seemed to flow in the crowd in non-stop motion as he shook hands and smiled with his sad eyes. He was the star of the show: the photos were taken by him. His name was Roy Tash. I left the exhibition with an inchoate feeling that he might be Armenian, despite his name. I soon forgot him.

A few weeks ago, while flipping through an old book, I came across a folded clipping from the ‘Toronto Star’. I gently opened the yellowing paper and saw it was a 1988 news story announcing the death of Roy Tash. The headline said: “Roy Tash, 90, Canadian dean of newsreel photographers”. There was a recent photo which identified him as a film pioneer and newsreel cameraman known for his dapper attire, old-world charm and his ability to ‘move like an eel’ while filming. The photo was of an old man, with white tufted mustache, silver hair and glasses. He looked like the chairman of the board of a Bay Street (Canada’s Wall Street) conglomerate. There was also a photo of Tash photographing, in 1934, the famous Dionne quintuplets of Canada.

Although Tash had not crossed my mind for nearly 50 years, I decided to find out why I still held the suspicion that he might be Armenian.

Thus began the adventure to find Roy Tash and his roots.

I Googled and pored into the records of the Library and Archives Canada (“Ancestors Search”). In Findmypast.com I found a Roy Tash. But he had died in 1989. There was also a U.S. Civil War veteran called John Tash.  Familysearch.org listed a Roy Tash who was born in Missouri in 1900. There was an R.M. Tash born in Brooklyn. In the JewishGen database of burials I found a Max Tash who was born in 1896. But Max had died three years after Roy. I read Canadian cinema photography magazines and books which talked about Roy Tash’ celebrated career. While there was a great deal of information about the photographer who had received more awards than Canadian photography superstar Yusuf Karsh, there was no mention of an Armenian connection. I checked with Toronto Armenian organizations, people active in the Armenian community, people who were third- or fourth-generation Canadian Armenians. No one had heard of Roy Tash, let alone have knowledge of his origins. I telephoned Onnig Cavoukian in British Columbia. He had worked with his father, the celebrity portrait photographer (Cavouk of Toronto) for decades. Onnig, the brother of children’s song writer Raffi, hadn’t heard of Tash. I spent several hours at the Toronto Reference Library and a day at the Toronto City Hall Archives. Nothing about Tash’s roots.

I contacted an Armenian woman who was born in Canada in the ‘30s. Through the Internet she found out that a daughter of Roy Tash lived in Toronto. She gave me the daughter’s phone number. I phoned the “daughter” and left several messages. I didn’t hear back.

Through the Canadian national archives I found an article, written in 1976, about Tash for ‘Motion’ magazine. There was nothing in the article about Tash’s origins. I contacted the writer (Michael Ryval). He said Tash’s origins had not come up during the interview.

Meanwhile, I learned a lot about his long career. He was called “Mr. Newspictures of Canada”. A life member of the Toronto Press Club and the Canadian Picture Pioneers, a year before his retirement (1967), the Canadian Broadcasting Corporation had aired a celebratory program about him.

Most articles repeated that Tash was born in Brooklyn, New York in 1898 and grew up in Chicago before moving to Toronto in 1919. They mentioned he had been a major newsreel photographer. Prior to TV, images of world events were shown in theatres, before the cartoons and the feature. From the late ‘20s to the mid-‘50s the world had seen Canada often through the lens of Tash.

Royal visits and regattas, fires, floods and funerals were standard fare for him. Getting the news to cinema screens in the shortest time possible was of the essence. Deadlines never receded and competition was fierce. No one could beat Tash at the game. His motto was: “Never take no for an answer.”

In 1963 when Canada’s National Film Board (NFB) held a newsreel exhibition of 60 major Canadian events, more than 30 percent of the reels were that of Tash. In 1967 he received the Centennial Medal of the NFB and was inducted into Canada’s News Hall of Fame (1982). The Canadian Society of Cinematographers honored him with the Roy Tash Trophy, a gold-plated camera, which is awarded every year to the best Canadian news cameraperson.

The articles said he had moved to Chicago at an early age had worked, after school, at a nickelodeon, sweeping peanut shells off the floor. At 16 he had become assistant projectionist. Around the same time he had acquired an old camera and had taught himself the basics of photography. In 1918 he had witnessed 800 people drown when their ferry boat capsized at the Chicago dockside.

Tash told Ryval: “I came to Toronto in 1919 and joined up with some fellows called Irwin Proctor and Clifford Sifton. We set up Filmcraft Industries…We did a lot of work for the Ontario government, propaganda stuff for the ministries. Besides that we also did newsreels. Then we had a fire and were knocked out of business.”

After the company went belly up, Tash got a job with a tabloid as a still photographer. He then became the photographer of one of the earliest Canadian feature films. “Satan’s Paradise” (1922) was about a phony spiritualist. The silent movie had a budget of $2,000. A few years later he was director-editor of the federal government’s Arctic expedition to open up the north to winter navigation. The group travelled within 500 miles of the North Pole. They were nearly shipwrecked. As a result of his Arctic experience, he was hired the following year by Montreal’s Associated Screen News. The relationship, which lasted more than four decades, ended 1967 when he retired. His last assignment was the Santa Claus Parade in Toronto. During his long tenure, the company supplied news footage to the big American film companies—Fox Movietone News, MGM News, Paramount, and Universal.

Armenians know the story of how Karsh got his famous photograph of Churchill when (1941) he pulled the cigar from the lips of the British prime minister at Parliament Hill in Ottawa. Tash also had a 1941 cigar story with Churchill in Ottawa. Churchill was flicking the ashes of his cigar in an ashtray when Tash grabbed an envelope and put the ashes in it.

“What are you doing?” a belligerent Churchill asked.

“Collecting the ashes of a great man,” Tash answered smoothly.

Churchill smiled and said that in that case Tash could have some more and he flicked ashes into Tash’s palm. “They were hot, but what could I say?” Tash told Ryval.

The adventure to find Tash’s roots continued. Google said the name might be Jewish, German, Scottish…and Tash was a corruption of the German “tasch” meaning bag.

Then I hit gold. At Ancestry.com I discovered that his middle name was Haig. It’s English but also an  Armenian name. This Roy H. Tash had crossed, according to ancestry.com, from the Detroit border to Canada sometime between 1905 and 1963. A Roy H. Tash was on the Canada voting lists ten times.

A chat with Susan King at Ancestry.com was the clincher. Tash’s father was Reteos/Retevos Taslyian, company documents said. He had immigrated to the US in the early 1890s. The first and last names of immigrants were often misspelled by immigration officers, especially if the immigrant was not Anglo-Saxon. Tash’s mother was Zanazan, also spelled Zanazar in some US government records. In different documents the family name was Tashfian, Tashijian, Tashian… Haig was spelled Haighk.

Then Marc A. Mamigonian, director of academic affairs at the National Association of Armenian Studies and Research in Belmont, MA, joined the search. Through him, I learned that a Reteos Tashjian (born in 1859) and Zanazan Durgarian (born 1863) of Sivas had married in 1878. A few years after landing in New York, they had moved to Chicago where Reteos, according to the Cook County 1910 census, worked as a rug weaver. The family was identified as “W” (white) in the race/color column. There were eight children.

Why did Haig become Roy? Perhaps because Haig Nahabed was our first king, Haig or his father changed the name to the Ango-Saxon Roy. It means king. A long shot. Zanazan had died when her youngest son was sweeping the floor at the neighborhood nickelodeon and learning to become a projectionist. Two years after Roy lost his mother, his brother Haig Jon (27) and sister Armenouhe (22) died. Did Haig leave the country and change his name to flee his death-plagued family and start a new life? Was he insecure in an era when racism was rampant? But his contemporary Karsh didn’t hide his roots.

Haig-Roy married (Edna) in Canada and had two daughters–Norma McFadden and Bette Barrett. When he died, he had seven grandchildren and six great-grandchildren. He was buried in Toronto.

I still don’t know what made me suspect, back in 1967, that Roy Tash was Armenian. 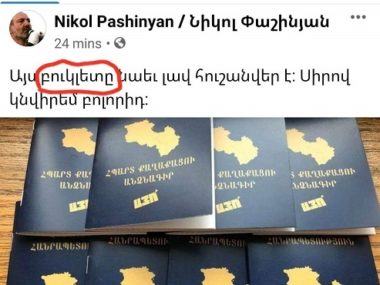 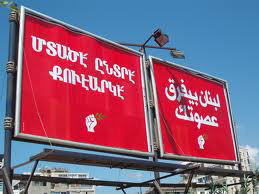