Internet in Armenia and Neighboring Countries

Many developing countries have achieved steady growth in internet usage in recent years by expanding coverage services and lowering access price. As the world

forges ahead into the digital economy through the pervasive diffusion of smart-phones, the internet, and broadband, it is imperative that developing countries work on removing barriers for development of an open as well as competitive internet system. A regulatory framework, which provides a level playing-field among all the different players, is critical to encourage investment and promote innovation throughout the digital value chain.

Many developing countries have achieved steady growth in internet usage in recent years by expanding coverage services and lowering access price. As the world

forges ahead into the digital economy through the pervasive diffusion of smart-phones, the internet, and broadband, it is imperative that developing countries work on removing barriers for development of an open as well as competitive internet system. A regulatory framework, which provides a level playing-field among all the different players, is critical to encourage investment and promote innovation throughout the digital value chain.

Effective digital network creates a demand and supply for internet goods and services and it also becomes the foundation of a modern digital economy as the internet extends its reach into all other areas of the economy. When the internet becomes available throughout society, it increasingly becomes the means by which all businesses work irrespective of which industrial sector they fall into. The internet becomes an important part of non-internet sectors of the economy.

Armenia, Azerbaijan, Georgia, Kazakhstan, the Kyrgyz Republic and Turkmenistan have mobile penetration rates in excess of 100%, all exceeding the global average of 96%. Armenia, Azerbaijan, Georgia, and Kazakhstan also have fixed line telephone penetration rates above the global average of 16%. Figure 2 shows number of subscribers per 100 inhabitants.

While most countries in the former Soviet Union remain significantly below the global average of 10%, Azerbaijan, Georgia, and Kazakhstan have fixed broadband penetration rates above this, with Armenia only slightly below. In mobile broadband Armenia performs well against the global average as well. In countries such as Armenia and Georgia mobile became the de facto communication vehicle during last 10 years.

The Trans Asia Europe (TAE) line connects Armenia, Azerbaijan, and Georgia to the internet. The 27,000 km international cable runs from Frankfurt (Germany) to Shanghai (China). This line was established in 1998 and was recently upgraded to 200 gigabits per second (Gbps) by Russian Rostelecom and China Telecom. Armenia has additional connections through Georgia and Iran.

Georgia has also access to undersea cables that run through the Black Sea. However, recently an underwater volcano damaged Poti-Novorossiysk-Sochi fiber-optic cable which impacted internet providers in Georgia and Armenia. Azerbaijan operates the AzerSat-1 satellite, which provides capacity for broadcast and internet transmission.

Mobile broadband and increasingly affordable smart-phones are becoming the de facto means of bringing users online and increase usage, this does not minimize the importance of deploying fixed broadband infrastructure to support the growth of overall broadband use, especially the expanded use of Wi-Fi in urban areas. Thus while it is important that investment is made to capture rapidly growing mobile demand, attention is also given to building the fiber-optic networks necessary for long distance backhaul and traffic management.

Internet Affordability
Monthly cost of internet transit traffic in Armenia is $15 per megabyte per second (Mbps). The cost is same in Georgia but is $20 in Azerbaijan.

Mobile Broadband Coverage
Armenia
Armenia has near universal mobile broadband coverage. In 2015 all but 23 of the 1,000 towns and villages or 98% of Armenian’s territory had 3G services with 45% of the population subscribing to 3G services. There are at least three factors contributing to Armenia’s success in providing such coverage:

1. Armenia is market-friendly in both broadband and mobile services. Its top three operators have parent companies abroad. In the fixed broadband market the picture is similar with new entrants, backed by foreign investment, expanding their market share through aggressive marketing and service offerings.
2. Armenia had a comparatively early start in rolling out 3G. VivaCell and ArmenTel were both awarded 3G licenses in 2007 and Orange Armenia in 2008. The Public Services Regulatory Commission (PSRC), an independent regulator created in 2004, has been effective in welcoming new companies and assigning additional frequencies as demand increases.
3. The growth of tech start-ups, an area enjoying strong state support, is increasing demand for data and data-related services.

The two major cellular service providers are VivaCell which is majority owned by MTS of Russia and ArmenTel which s affiliated with Vimpelcom of the Russia. The Orange Group which was owned by France Telecom-Orange is the third operator. There is also a fourth provider, UCOM, whose priority is mobile internet. Recently UCOM purchased Orange Group.

GNC-ALFA, a broadband service provider majority-owned by the Russia’s Rostelecom, invested over $35 million into network expansion and interconnection with the region’s major international gateways. The improved speed and bandwidth enabled the carrier to dominate the fixed broadband market in Yerevan. It now operates in 15 cities in Armenia.
Presently VivaCell is the only operator offering LTE service, which covers more than 47% of the population. UCOM plans to launch LTE service in 2016. In January of 2016 Armenia switched from analogue to digital TV, which will free up further spectrum for future LTE roll out and possible use of the unused radio spectrum.

Georgia
Georgia has progressed rapidly in rolling out broadband by promoting wireless access. Georgia has promoted an open and competitive mobile market, with foreign-backed operators, such as Mobitel. The 3G roll out had an early start, with the first set of licenses awarded in 2006 to MagtiCom and GeoCell.

Azerbaijan
In mobile broadband development, Azerbaijan has 3G coverage for 41% of its population. Azerbaijan had a comparatively late start, as Azerfone started 3G service in December of 2009 followed by 3G services by Azercell and Bakcell in November 2011. While Azerbaijan has introduced a series of market liberalization initiatives, there is lack of competition in the fixed broad band market and low fixed-broadband network coverage which constrain future growth. There are over 40 private ISPs but market is mainly controlled by Baku Telecom Production Association (BakTelecom) and AzTelecom, which both are wholly owned by the Ministry of Communication and High Technology. There are also regulatory bottlenecks at the wholesale level.

Financial System
The resent-day financial system heavily depends upon the interconnectivity of payments systems. As mobile platforms become ever more widely used; therefore, payment networks have begun to integrate with mobile networks. Digitally integrated payment platforms stimulate a range of entrepreneurial activities and innovations, positively impacting the private sector by spurring innovation and investment. When set up properly, mobile money services can provide cheaper, faster, and safer means of transferring, compared to traditional alternatives. Since mobile money transfer is also instantaneous, time savings become an increasingly important benefit, particularly for small or remote businesses. All of the banks in Armenia have web based services with different degrees of capabilities.

I-dram payment system, which has operated in Armenia since 2004, provides customers the option of paying utilities and loans, transferring money internationally, and conducting other transaction via online. This system is mainly used on mobile phone or other mobile devices and can also be setup as a mobile wallet.

TelCell is another company that provides electronic payment services and in February of 2016 the Central Bank of Armenia gave TelCell the permission to issue electronic money for web and mobile electronic purse applications. TelCell, launched in Armenia in 2007, has more than 300 payment terminals in Yerevan, Gyumri, Vanadzor, Etchmiadzin, Sevan, Hrazdan and Artashat. These terminals are used to pay for the utilities.

Job Searches
The internet makes labor markets more efficient by connecting a larger pool of individuals and firms at lower cost. LinkedIn, the largest online professional network, has more than 310 million registered members, 67 percent outside the United States. In most countries online job search remains concentrated among youth and the best educated and grows with income. Online job search among the employed and unemployed is above 20% in urban Armenia and Georgia.

e-Government
The expanded use of internet triggered development of e-government systems to automate core administrative tasks, improve the delivery of public services, and promote transparency and accountability. Transitioning countries, such as Armenia, have done fairly well on foundational skills, but they face the challenge of keeping up with some of the new skill demands arising from digital technologies, especially higher-order skills. In 2014 Armenia was ranked as 61 among different countries in e-government services, where Georgia was raked as 56th and Azerbaijan as 68th.

Education
The lower income countries facing issues of basic connectivity for schools, the cost of connection, the bandwidth availability, the costs of maintenance, and the human resources required to explore the opportunities for e-learning in schools. With the spread of smart phones and portable devices a new challenge is also arising, which is using multi-device connectivity for educational applications that combine audio-visual and interactive elements over the internet using wireless and mobile networks in the classroom and outside for homework. Universities in Armenia have started offering online courses as broadband internet becomes more widely accessible. Yerevan Haybusak University has the most extensive online courses. Armenian Virtual College that was launched in 2009 provides accredited courses in Armenian studies online primarily geared toward Armenians in Diaspora. The Armenian Virtual College is also developing a series of multimedia e-books to promote the Armenian history and culture.

Read More
By Jirair Tutunjian, Toronto, 10 August 2012 Four hundred years after his death, there are still mysteries to…
Read More
0
0
0

Read More
Prof. Eberhard Demm, Hürriyet, 30 November 2009 This ‘new description’ [of the Genocide of Armenians] is a crashing…
Read More
0
0
0 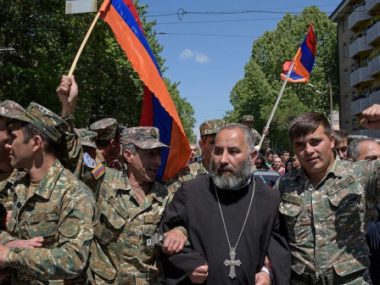