Is Erdogan Losing His Marbles?

Listening to Turkish Prime Minister Recep Erdogan’s words in the past year one wonders whether he is delusional or suffering from an unfounded and overweening hubris.

Last June, in Davos, he threw a nursery-class temper tantrum at an international gathering and insulted Israeli President Simon Peres, a long-time friend of Turkey.

Erdogan later defended the Sudanese dictator against charges of genocide because, according to Erdogan, “Moslems don’t commit genocide.” The mind reels at the denialism, hypocrisy and ignorance.

Listening to Turkish Prime Minister Recep Erdogan’s words in the past year one wonders whether he is delusional or suffering from an unfounded and overweening hubris.

Last June, in Davos, he threw a nursery-class temper tantrum at an international gathering and insulted Israeli President Simon Peres, a long-time friend of Turkey.

Erdogan later defended the Sudanese dictator against charges of genocide because, according to Erdogan, “Moslems don’t commit genocide.” The mind reels at the denialism, hypocrisy and ignorance.

Following the Israeli commando attack on the Gaza-bound flotilla, Erdogan repeatedly renounced Israel, although he knew too well that the United States and his own chaffing army leaders are allies of Israel. To add insult to injury (to the U.S), Turkey has nominated itself as interlocutor on behalf of Iran, which calls America “Great Satan.”

A few weeks ago a reckless Erdogan called on Israel to remove its foreign minister, Avigdor Lieberaman, calling him an obstacle to Middle East peace. The demand is probably unprecedented in the annals of international diplomacy. He then said, “Israelis must rid themselves [ofLieberman] and that is surely their duty and not ours.” For good measure, in the same interview with Al-Jazeera, Erdogan added, “Netanyahu’s government is the worst or the least fortunate in the history of Israel.” Israel’s Deputy Prime minister Silvan Shalom, bending backwards not to make waves, said that Erdogan’s words were inappropriate.

Ten days ago, while touring Kars, Erdogan called for the demolition of a local monument designed to promote reconciliation between Armenia and Turkey. The statue, comprised of two 30-metre concrete figures reaching out to each other, was, said Erdogan, a “freak.” The statue was erected by the city’s mayor who is a member of Erdogan’s Islamist Justice & Development (AKP–Adelet ve Kalkinma Party). On an earlier trip to the city, Erdogan had ordered the destruction of a fountain which featured bare-breasted nymphs.

A few days ago Erdogan called on German Chancellor Angela Merkel to apologize for blaming the Turkish side for the impasse in the Cyprus talks. Tossing diplomatic etiquette aside, the Turkish leadership accused Merkel of bias and lack of historic knowledge on Cyprus. In an address to the regional leaders of AKP, the voluble prime minister of Turkey said of Merkel, “These comments and attitudes do not give the impression of a leader who is far-sighted and visionary. We expect Merkel to apologize to the Turkish side.”

The man is on a binge.

Turkey is strong; Turkey is big; Turkey is important; Turkey is key to East-West/North-South peace; Turkey is a democracy; Turkey is the new rising power; the 21st century belongs to Turkey… Who utters this nonesense? Why? Turkey, of course. The self-hypnosis might persuade Erdogan and his two buddies (Davutoglu and President Abdulla Gul) that Turkey is a player because they say so. For the rest of the world, except, of course, Azerbaijan, the Turkish self-advertisements are just that.

Why is Turkey important? etc. Because Turkey is a peace-maker. Turkey is a peace maker although it failed to arrange peace between Israel and Syria and despite giving up, a few days ago, its peace-making mission in Lebanon.

Erdogan’s Turkey is strong. Why? Because it has an army of one million. Forget that there is doubt about the loyalty of that army’s Kemalist leaders to Islamist Erdogan. And forget that the much-vaunted army would collapse without the help of the United States—the country Erdogan seems to enjoy bear-baiting.

Turkey is a big country, with a population of 75 million. If one deducts 20 million or so persecuted Kurds, the countless and discriminated Alevis in addition to other mistreated minorities, Turkey would have a population of less than 40 million Turks.

Then there is Turkey’s ambition in the Arab World. In a blatant and bizarre move, Erdogan and his foreign minister have launched dreams of New Ottomanism. No, Erdogan will not become the new Caliph-Sultan of the Sublime Porte, nor would Davutoglu become his Grand Vizier. The Dynamic Duo merely wants to dominate the Arabs, although there already are three (Egypt, Saudi Arabia, and Iran) long-time contenders for the position. In other words, the moment Saudi Arabia and Iran sense Turkey is getting too big for its breeches, they will make sure Turks pull back from Arab lands faster than their Ottoman grandfathers did.

The other “pillar” of Turkish adventurism is its relatively healthy economy. A few years of rising GDP and voila, Ankara thinks it’s the second Frankfurt. But that economic house of cards could be on the edge of collapse. According to Turkey-friendly Wall-Street Journal, Turkey’s mushrooming current account deficit is becoming a serious threat to the country’s economy. “Turkey’s statistics agency reported that the deficit more than trebled in November versus a year ago to a hit and fresh record of 5.93 billion, outpacing economists’ expectations and again spotlighting the key weakness of the economy,” said Joe Parkinson of Wall-Street Journal on Jan. 11. The deficit is the widest since records began to be kept in 1984. Import growth rose more than 10 times faster than export gains, which slowed to just 3%, said WSJ.

A few days ago Saban Kardas wrote in Today’s Zaman, “…realizing Turkey’s objective of reconfiguring the global order is likely to face many challenges; not the least, the question of having sufficient resources and a suitable political environment to sustain multifaceted global commitments.”

Kardas went on to say, “There is an obvious mismatch between the objectives Davutoglu set for Turkey and the country’s current reality. For instance, despite his visions of advocating the cause of less developed countries, Turkey itself still ranks 83rd in the United Nations human development index.”

And what about the drum beat of “Zero problems with neighbours”? Ask Armenia. Ask Cyprus? Ask Israel? Ask Greece.

Oh Erdogan; Oh Erdogan’s Brave New Turkey, whom the gods want to destroy, they first make mad. And “pride goeth before destruction and a haughty spirit before a fall” (Proverbs 16:18).

A country doesn’t become great because it says it is great. If that was the case, Lilliput would be a super power. Delusion, grandiose versions of one’s self, exceptionalism, self-importance, and inane hauteur will result in egg—if not worse—on Erdogan’s face.

Read More
By Robbie Gennet, The Huffington Post, 12 March 2010 Robbie Gennet is a songwriter, musician and journalist from…
Read More
0
0
0 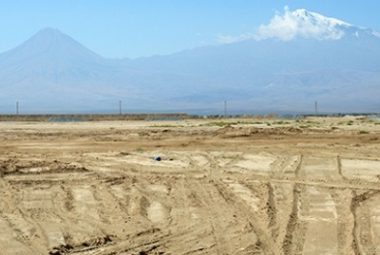