It is April 24 Again….so what has changed?

Armenians throughout the world will soon gather to mourn the victims of the first Genocide of the 20th century, the Armenian Genocide, or as president Barack Obama diplomatically labelled “The Meds Yeghern” in his presidential statement of last year.

Despite the disappointment expressed by many Armenians at president Obama’s failure to use the word genocide, I for one was satisfied since the president’s Statement both confirms and acknowledges the Armenian Genocide of 1915-1923. The statement issued on the occasion of what the White House calls ‘Armenian Remembrance Day’ said the following:

I have consistently stated my own view of what occurred in 1915, and my view of that history has not changed. My interest remains the achievement of a full, frank and just acknowledgment of the facts.

Armenians throughout the world will soon gather to mourn the victims of the first Genocide of the 20th century, the Armenian Genocide, or as president Barack Obama diplomatically labelled “The Meds Yeghern” in his presidential statement of last year.

Despite the disappointment expressed by many Armenians at president Obama’s failure to use the word genocide, I for one was satisfied since the president’s Statement both confirms and acknowledges the Armenian Genocide of 1915-1923. The statement issued on the occasion of what the White House calls ‘Armenian Remembrance Day’ said the following:

I have consistently stated my own view of what occurred in 1915, and my view of that history has not changed. My interest remains the achievement of a full, frank and just acknowledgment of the facts.

In his dual role as a presidential candidate and as a senator from Illinois, Obama used the term "Genocide" to characterise the events of 1915-1923. Upon assuming the office of the presidency American strategic considerations set in, and yes, Turkey is strategically important to the U.S., a point emphasised on a regular basis by Turkish authorities and as a consequence the election pledges were somewhat reneged.

Since there is always likely to be a conflict or a festering conflict in Central Asia, the Middle-East, the periphery of Europe or some other region, Turkey will continue to promote itself as strategically important to the U.S This despite that it prevented its land mass to be used to transfer U.S. troops to Iraq, its recent warming of relations with Iran, and increased display of public animosity towards Israel.

If this logic is followed to its conclusion then there will be no occasion that would be deemed by American policy advisers as constituting a strategically appropriate time for the U.S. to officially acknowledge the Armenian Genocide perpetrated by Turkey 95 years ago.

The time has therefore come to stop squabbling over semantics and whether the word "Genocide", "Meds Yeghern", "great atrocities" or "crimes against humanity" should be used to describe the uprooting of the Armenian nation from their 4,300-year-old ancestral lands. Instead, the time has come to demand our national rights by promoting and advocating our national interests.

Let us pause for one moment and contemplate this issue. What will change today if the president of the United States suddenly utters the words Armenian Genocide in a presidential statement? Will the geographical situation change? Did it change when President Ronald Reagan described the Armenian mass killings as "Genocide" in his speech on April 22, 1981? The answer is an unfortunate "no".

Despite the noble annual campaign that Armenian-Americans engage in to persuade their president to refer to the Armenian mass killings by its proper and legal definition of "genocide", the geopolitical landscape today is different or at least it is being promoted as being different as we approach yet another April 24.

While the much-publicised Protocols between Armenia and Turkey are in limbo, the fact remains Armenia and Turkey have commenced the process of normalizing diplomatic relations. For me this is a natural evolution long overdue as Armenia and Turkey are neighbours and will continue to be neighbours. It may well be true that both sides were pressured to start the process and that it is being manipulated by Turkey to undermine the global recognition of the Armenian Genocide. Irrespective of the genesis or actual intention behind the Protocols, it is the end result that will be vital for Armenia and the Armenian people. This is why it is important that national interests are properly safeguarded and not compromised in any discussions with Turkey.

Are Armenia and the Diaspora working towards a common objective? I would place the objective of achieving a secure, viable and prosperous Armenian state at the forefront of our national interests. The current Republic of Armenia has a long way to go before it is secure, viable and prosperous. The task of achieving this objective may well take decades but it must commence today.

President Serzh Sargsyan, on his recent official trip to the U.S., visited the Washington National Cathedral and laid a wreath at the tomb of former American President Woodrow Wilson. President Wilson, as we know, was the architect of Wilsonian Armenia, a vision of Armenia that not only incorporated significant portions of the Armenian provinces of the Ottoman Empire, but also envisaged an Armenian homeland that had access to the Black Sea–an Armenia that was not landlocked.

If we want to achieve a secure, viable and prosperous Armenian homeland, it is imperative that the Armenian government removes the symbolism associated with Wilsonian Armenia and transforms it into a key foreign policy objective. Let us hope that President Sargsyan’s visit to the tomb of President Wilson was motivated by such geopolitical considerations and aspirations.

Being a member of the Armenian Diaspora, I have a certain bias towards what I view as another issue of national interest–addressing the consequences of the Armenian Genocide. This is a complex, emotional and multifaceted topic that needs to be addressed as a matter of urgency to allow for an opportunity of true reconciliation between the Armenian and Turkish peoples.

The undertaking should start immediately and be aligned to supporting the evolution of gradual openness in Turkish society. Not long ago the Armenian Genocide was a taboo subject, but now it is being being discussed on a more regular basis in Turkish academia, mass media and even society in general. The Armenian government must seize the opportunity provided by the current developments aimed at normalising diplomatic ties with Turkey to start addressing the consequences of the Armenian Genocide.

The Armenian people must demand more than just an official recognition by Turkey and others for the Genocide. Uttering the word to describe those mass killings–whether it be President Obama and hopefully one day the Turkish president–will not be sufficient to address the consequences of the Genocide of Armenians. Official recognition of the Armenian Genocide is welcome but the long- suffering Armenian nation also demands and should receive legal and political redress for the wrongs of the past 95 years.

As the children of the survivors of the Armenian Genocide, living and growing up in the Diaspora, every calendar day for us is April 24. Let us re-evaluate our national objectives and work towards their ultimate realisation.

This year, as we gather to commemorate the 95th anniversary of the Armenian Genocide and embark on the path towards the centenary year, let us not lose sight of our real national objectives–a secure, viable and prosperous Armenia.

Read More
By Peter Goodspeed, The National Post, 11 September 2010 The battle between secularist liberals and conservative Islamists for…
Read More
0
0
0
These documents are supplements to The Sins of Sargsyan & Co. Visit Pashinyan Case No: EKD 0173/01/10 Decision…
Read More
0
0
0 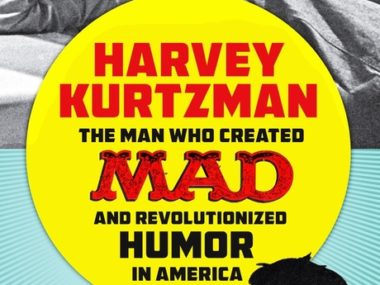 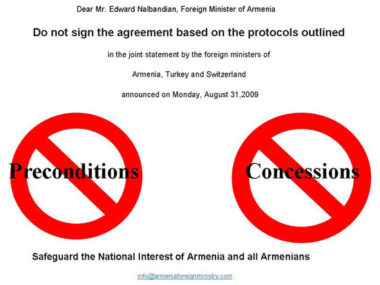 Read More
If you believe that the proposed Protocols are to the detriment of Armenians and Armenia, then please email…
Read More
0
0
0 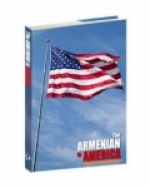 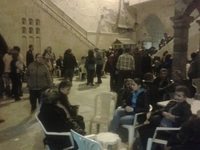