Woman With a Mission

Born in Cambridge, Mass. in 1989, gymnast Gebeshian is a physician’s assistant in Cleveland, Ohio. She obtained Armenian citizenship in 2010. Due to her strong performance at the first (Glasgow, Scotland) and second round (Rio de Janeiro), she qualified to participate in the upcoming Summer Olympics in Rio. Unusual for a gymnast, she has no coach. “I coach myself…I create my own training plans, and diet plans,” she says. At 26, she is ten years older than most of her rivals. Houry is the only female gymnast representing Armenian (from USA) at the Rio Olympic Games. She is financing her own bid for a medal. Please support her by clicking on Hooting For Houry . – Editor

Keghart: Congratulations Houry. now that you have secured your participation in the Olympic games in Rio de Janeiro in August, could you tell us how many female gymnasts (teams and individuals) will participate and from which countries?

Houry Gebeshian: A total of 98 male gymnasts and 98 female gymnasts (teams and individuals) will participate at the 2016 Summer Olympic Games in Artistic Gymnastics.  The teams are allowed to bring 5 gymnasts of their choosing

Keghart:  Why gymnastics? What attracted you to the sport? How old were you when you joined the sport?

Houry: I started gymnastics when I was 5. I think every little gymnast has a very similar story about being an active child.  My mother loves to tell the story of how I used to somehow wiggle myself out of my car seat.  She knew I needed to get involved in something so she took me to a local YMCA.  The teachers there told my mom that I needed to go to an actual gymnastics gym and lucky for us Massachusetts Gymnastics Center (my home gym) was coincidentally right around the corner from our house!

Houry: I am the first and only female gymnast to represent the Republic of Armenia at the Olympic Games.  We have 2 male gymnasts that have qualified to the Olympics.  Harutyun Merdinyan, a pommel horse specialist, and Artur Davtyan, an all-around gymnast.  They are very strong and talented.  Harutyun will focus his efforts on winning a medal in the pommel horse and Artur will focus on winning a medal on the vault and/or the all-around.

Keghart: Do you know of other Armenian gymnasts who are in teams of other countries? Is there any gymnast who stands out and has a good chance of winning a medal either in individual or team formation?

Houry: Seda Tutkhalyan is a phenomenal gymnast of Armenian descent who competes for Russia.  She is a strong all-around gymnast.  If she makes the team, she will try for a medal on the balance beam and/or the all-around.  The Russian team will try to secure a top 3 medal.

Keghart: Most girls competing in your category are about ten years younger than you. What are the advantages and disadvantages in being a decade older than your rivals?

Houry: Women’s gymnastics is a sport typically dominated by younger athletes.  Currently, the average age for female gymnasts competing at the senior international level is 19.  The disadvantage for me is that the younger athletes are typically able to withstand more pounding on their bodies, numbers of repetitions, and training of bigger and harder skills.  They are also, usually able to recover from strenuous training and injuries much quicker.  However, with increasing age one gains wisdom and maturity.  I have competed for longer, and I have been able to develop a mental toughness that comes with that.  I have more experience with understanding how my body works, and what limits I have to remain healthy.

Keghart: Has your self-funding project on the Internet raised an enough amount to cover a substantial percentage of your expenses? [I will include the GoFundMe address].

Keghart: Since you represent Armenia, what support have you received from Yerevan?

Houry: The citizens of Yerevan have been very supportive of my comeback.  I have received many messages from people living in Armenia.  It is very encouraging to hear how proud they feel about my journey and accomplishments.  The media in Yerevan have also been very supportive in covering my endeavors.  I have had many interviews and articles in Armenia as well as throughout the world to our diaspora.  Now that I have officially qualified to the Olympics, I am part of the Armenian Olympic Federation.  They have given me this opportunity to represent our country, and I am very grateful for that.

Keghart: How is the project to create an Armenian women’s gymnastics team coming along?

Houry: Now that the Republic of Armenia has a competitor for the first time in women’s gymnastics at the Olympic Games, I would say that the project to create a women’s program is coming along pretty well!  The first step is raising awareness, and I think we are doing a good job at that.  Throughout this journey I have met many young female Armenian gymnasts.  I do believe they are talented enough to represent our country when my time has passed.  It is my plan to help the younger generation develop into the position I am in now.  I think the best thing for them would be for me to either formally coach or become a women’s judge for our federation.  I will look into this position once I am done competing, but I do not think it will be difficult to initiate.

Keghart: What are your plans following the Olympics?

Houry: I am not sure if I will continue competing after the 2016 Olympic Games.  I came back to the sport because I felt unfinished, and I didn’t want to end my career on such a bad experience.  I knew I still had fight left in me, and if I didn’t

try again I would have regretted it forever.  During this return I have actually felt the best I have ever felt both physically and emotionally.  I am in the best shape of my life, I am doing the best gymnastics I have ever done, and I am truly happy.  There is nowhere else that makes me as happy as when I am training in the gym.

I am not sure what I will do after 2016.  There is a part of me that would like to be done competing after the Olympics.  I have a great career outside of the gym, and I would like to see where that takes me.  Being a physician assistant, certified athletic trainer, and an elite gymnast gives me a very unique perspective on sports medicine and training other athletes.  I feel that there is a future for me in that field, but I don’t know when I would start with that.  I do know that I will definitely still be involved with the sport maybe through judging or coaching for Armenia.

One of the largest obstacles I had to overcome during this process has been obtaining a judge.  Each country is required to bring a judge to international competitions.  Without a judge, one has to pay a substantial fine.  This puts me at a competitive disadvantage as well as increases the financial burden.  I really would like to help develop an Armenian women’s gymnastics team.  If I take the coursework and become a certified brevet judge, future female gymnasts will not have to face this obstacle. I have had so many great experiences and I am so fortunate to have had the opportunity to compete for the Republic of Armenia that I want others to have those same experiences and more.

Keghart: Would you like to make any other remarks?

Houry: The greatest achievements are usually those accomplished by a strong team.  Although gymnastics is usually viewed as an individual sport, I could never have made this experience a reality without the help of everyone in my life. From the beginning, my family supported my dream and made the sacrifices that come with being a competitive gymnast.  My home gym, Massachusetts Gymnastics Center, gave me a very strong foundation to grow from.  My experiences at the University of Iowa helped refine my confidence as a woman and athlete. Precision Choreography tirelessly worked to create routines that showcased my talents.  Gymnastics World in Cleveland, Ohio graciously allowed me the time and space to train during my comeback.  Ozone Leotards sponsored beautiful custom made leotards and warm ups. Levon Karakhanyan, helped organize my involvement with the Armenian Gymnastics Federation and who traveled with me to competitions. Lastly, my friends, fans, and the Armenian community who were so supportive and encouraging throughout this incredible journey to the Olympics.  None of this could have been possible without the support of everyone in my corner.  I am forever grateful.

Keghart: Thank you on behalf of Keghart.com readers. We wish you all the best. 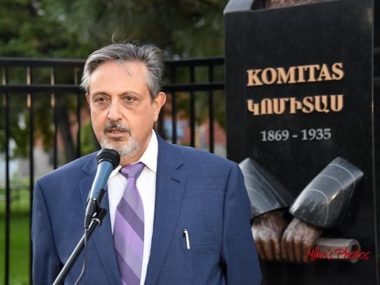