LOS ANGELES—More than 12,000 Armenian Americans from throughout California converged on the Beverly Hilton Hotel to protest the Turkey-Armenia protocols as Armenia President Serzh Sarkisian met with representatives of Armenian American organizations to defend his decision to sign the flawed documents. The protest was organized by the Stop the Protocols Campaign.

Protesters held signs proclaiming, “Serzh Don’t Betray the Armenian People,” “Turkey Accept the Genocide!” and “No to the Protocols!” Meanwhile, planes overhead were carrying banners which stated “Stop Turkish-Armenian Protocols,” as large moving vans drove around the hotel with billboards picturing presidents Sarkisian and Gul with the slogan “Don’t Betray us.”

Prior to the beginning of the community meeting, Sarkisian’s delegation stood out on a 12th floor balcony and watched demonstrators, who called out in hopes that the President would address them directly. Sarkisian chose not to address the people.

During the fourth hour of the protest, several hundred frustrated demonstrators broke through the barricades and stormed across the street to the hotel entrance, yelling “votch, votch,” stopping traffic on Wilshire Blvd.

Meanwhile ARF Western Region Central Committee member Hovan Tashdjian, who had just left the meeting with the President, described a tense Sarkisian faced with overwhelming opposition by community representatives, attempting to defend the formation of a so-called “historical commission” and arguing that the Protocols would not affect the Karabakh peace process.

Tashdjian commended the thousands who had turned out for the Sunday afternoon protest, ensuring that their voices were heard at the meeting since “your representatives conveyed your anger and frustration over the protocols.”

Sarkisian has embarked on a Diasporan junket to gain support for the beleaguered Turkey-Armenia Protocols, which have met with resounding rebuke by Armenians around the world. He has been met with protests in Paris, New York and Los Angeles, with additional demonstrations planned in Lebanon and Russia.

Inside the Meeting
Representing the Armenian National Committee-Western Region, Steve Dadaian described the meeting to Asbarez as being tense. Of the 65 or so participants, only 29 were allowed to speak, of who only three individuals expressed complete or partial support for the protocols.

“He was unprepared to discuss the text of the agreement. This is the emperor’s new clothes tour—he’s naked and he’s expecting everyone to say ‘you look great.’ It was sad,” explained Dadaian.

During his three stops on his Diaspora tour, Sarkisian’s message has been that the Diaspora should have faith in this initiative, which he underscored by initiated by Armenia without any external pressure.

He assured his largely skeptical audience that the normalization of Turkish-Armenian relations would create an atmosphere of mutual confidence.

Sarkisian gave assurances that there would not be a discussion of the Armenian Genocide within the framework of the protocols.

“The only question in connection with the Genocide that can become a subject for discussion is how we can help the Turkish people to be more unbiased in going through the pages of their own history or, to be more precise, how to overcome the consequences of the Genocide,” Sarkisian stressed.

“I believe that it is possible to have normal negotiations, have normal relations with Turkey and benefit from it,” Sarkisian underscored.

The participants of the Los Angeles meeting echoed sentiments by their Diasporan counterparts in New York on Saturday and Paris on Friday that the protocols were loaded with dangers to Armenia’s national security and to the future of the Armenian people.

Sona Madenlian, speaking on behalf of the Armenian Relief Society explained that throughout its existence, the ARS has devoted all its efforts to provide for the needs of the homeland from the time of the Genocide to the present. Under the current circumstances, Madenlian wondered out loud whether all that work was necessary.

In the wake of the protocols, Madenlian also asked the president what the message should be to the younger generations.

“They are used to protesting Turks, not protesting the Armenian President. How will we be judged by our future generations?” pondered Madenlian.

The AGBU’s Albert Boyadjian framed the protocols as the best thing for Armenia, extolling that as a result Armenia will prosper economically.

Meanwhile, Sarkisian’s spokesman Samvel Farmanian on Monday confirmed to RFE/RL that the Armenian president had received an official invitation from his Turkish counterpart Abdullah Gul to visit Turkey to attend the return match between the two countries’ national football teams.

Montebello Martyrs Monument
Hundreds of Armenian-Americans answered an urgent call to action and converged on the Montebello Martyrs’ Monument Monday morning in anticipation of a visit by President Serzh Sarkisian, who is in the Southland on the third leg of his Diaspora tour.

On Sunday, more than 200 people answered another immediate call to action to rally at the Montebello Memorial, forming a human barricade around it to prevent Sarkisian from using the monument for a publicity stunt while in Los Angeles on his tour of the Diaspora. The Monday crowd was estimated to be larger.

The president, however, did not visit the Montebello Martyrs Monument, and as such concludes his visit to LA, leaving the largest Armenian community outside of Armenia dissatisfied and angry.

From the picket’s start the mood was serious and the demonstrators were indignant and angry. The atmosphere quickly grew intense with chants of “Turkey is guilty! Turkey must pay!” Early on, the crowd sang Armenia’s national anthem, “Mer Hairenik” (“Our Fatherland”).

Sarkisian and meeting attendees were already in the hotel when the picket began at 4 p.m. The meeting was scheduled to start at 5 p.m. and last for over two hours. The area inside and outside the hotel was heavily guarded by New York City police officers and plain-clothed agents, as well as Sarkisian’s own security guards.

In the hotel, a small group of protesters representing the Association of Concerned Young Armenian Americans attempted to deliver a letter to Sarkisian expressing their opposition to the protocols. They were met with resistance. During a heated discussion with members of the president’s security team, they demanded to deliver their letter personally to Sarkisian, saying that too much discussion on the protocols was occurring behind closed doors and challenging Sarkisian to honor his earlier promises to hear all opinions on the protocols during his tour of major diasporan cities.

At around 7 p.m., as the picket entered its final minutes, dozens of picketers moved from the picket area across the street to assemble directly in front of the Palace Hotel’s entrance, where they chanted and sang Armenian patriotic songs. Police moved in to force picketers out of the area and back across the street from the hotel, where they remained until dispersing around 7:30 p.m. 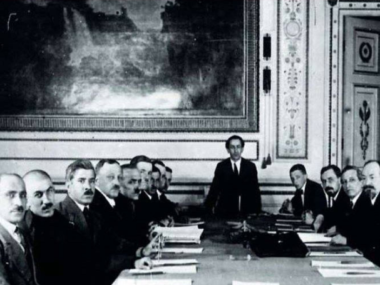 Read More
By Khatchatur I. Pilikian, London UK, March 2010 ‘To Acknowledge or Not to Acknowledge’ That is their Problem…
Read More
0
0
0