By Rick Salutin, thestar.com Sep 04 2014
Canadian novelist, playwright, journalist, and critic Rick Salutin in a recent article writes, "'Developments in other parts of the world, particularly in Iraq and Syria, threaten our security at home' (Barack Obama and David

Cameron, in the Times of London). I’ll say. In fact I think it’s the only thing you can say with assurance about either crisis they’re discussing: Ukraine and ISIS. But the threats I see at home may be different from those they have in mind.

By Rick Salutin, thestar.com Sep 04 2014
Canadian novelist, playwright, journalist, and critic Rick Salutin in a recent article writes, "'Developments in other parts of the world, particularly in Iraq and Syria, threaten our security at home' (Barack Obama and David

Cameron, in the Times of London). I’ll say. In fact I think it’s the only thing you can say with assurance about either crisis they’re discussing: Ukraine and ISIS. But the threats I see at home may be different from those they have in mind.

Start with Ukraine. Here’s a chilling thought. It comes from U.S. scholar Stephen Cohen, an A-list expert on Russia for many decades. During the Soviet era, he worked with dissidents and supported reform. He’s deeply perturbed at misinformation about the current crisis but even he has found it hard to get a serious hearing. The “official” version dominates.

He keeps trying but this is what he scarily tells young academics who want idealistically to widen the debate: “I always advise, ‘Even petty penalties for dissent in regard to Russia could adversely affect your career. At this stage of life, your first obligation is to your family and thus to your future prospects. Your time to fight lies ahead.’”

In other words, McCarthyism is back. That pestilence of the 1950s always aimed to stifle dissent, or punish it brutally when suppression failed. It was mainly a U.S. mania but we had our own politer and in ways crueller version. There was eventually a pushback when players like the U.S. military felt menaced — and even a glamourization of its victims via movies, books, etc. Now it’s returned via mere association with Russians, though communism itself is long gone.

This threat is to democracy’s security. How so? Concerning Ukraine, it’s hard to find any alternate “analysis” to the demonization of Putin, though it’d be easy to explain Russian behaviour as normal national self-interest, and leave the devil out. I’m not even arguing that, I’m just saying it’s arguable. People do discuss it on the Internet, but rarely in mainstream outlets. CBC’s Nahlah Ayed had an interesting report on Russians who challenge Putin’s denial of invading Ukraine. (Of course Russia is involved there, in the furtive way the U.S. is active almost everywhere. That doesn’t make it an “invasion.” An invasion is when you don’t deny it, you proclaim it — like Iraq.) Based on Ayed’s report, it’s possible dissenting journalism has as much — or greater — purchase there than here.

As for ISIS, I’d like to abandon my usual calm, objective tone. Yes, there’s a threat of domestic 9/11-type attacks by ISIS: either in the name of global proselytization or to teach the West what it’s like to be bombarded at home. But it’s the predictable result of western policies since 9/11: invasions, occupations, brutalizations in Afghanistan, Iraq and elsewhere. Western leaders and policy mavens knew these would elicit further 9/11s. That’s what I find despicable. They surely try to stop them but eventually some will probably get through — and they’re prepared to accept those, along with the terrorization of their own populations, as the price of their agenda.

In other words, they don’t invade or attack to stop future 9/11s. They accept future 9/11s as the cost for invasions and attacks with other purposes.

Such retaliations can arise in any society that’s been buffeted by outsiders, though they’re easier to mount in the globalized era. They already occurred in Ireland and Algeria. They often come from religion-based groups because those have deep roots and seem better able to survive repression than secular resistance movements. Occupiers like the U.S. are willing to risk the retaliation since, though terrifying and barbaric, it doesn’t menace them existentially: neither economically nor militarily. They’ll survive, and meanwhile have an excuse to tighten the screws on domestic dissent, further eroding personal security.

They of course don’t say any of this. In foreign policy, you never say what you mean. Routinely you say the opposite. On foreign policy, leaders lie even more than they do domestically, where there are ways to check veracity.

I’m not justifying 9/11-type attacks; they’re vile. There may even be cases where we must hit back despite reinforcing the cycle — and ISIS may be such a case. But our leaders damn well ought to try to put an end to that cycle, too."

Thomas Walkom, winner of  two National Newspaper Awards for foreign reporting and column writing, digressing with the propagated interpretations in the media regarding Ukraine Crisis states, "The standoff between Russia and the West is not quite what it seems.

First, it is not global. Unlike the Cold War, Russia and Western nations continue to co-operate in parts of the world where they have common interests. The joint U.S.-Russian action to remove chemical

weapons from Syria is a prime example.
Second, the West is far from united. It may suit Western leaders to say Russian actions in Ukraine pose the gravest threat to Europe in decades. But clearly it isn’t grave enough to convince Western Europeans — or the Americans for that matter — to cut economic ties with Russia.
Germany still imports Russian oil and gas. France is forging ahead with plans to sell Russia advanced naval vessels. Britain has not excluded Russian banks from the City of London.
Third, rhetoric aside, Western nations have tacitly accepted that Russian President, Vladimir Putin has a free hand in Ukraine.
U.S. President Barack Obama made that clear last week when he said he would not go to war over Ukraine. Ukraine, he noted pointedly, is not a member of the North Atlantic Treaty Organization and is therefore not covered by NATO’s collective security obligations.
These days, almost no one talks about Russia’s unilateral annexation of Crimea. Like Israel’s unilateral annexation of East Jerusalem in 1967, Russian actions in Crimea — while officially decried — are, in practice, accepted.
Should Putin seize more of Eastern Ukraine, there will be more tough words from the West. There will almost certainly be no serious military response.
Put simply, the U.S., Germany and France have no interest in going to war over Eastern Ukraine, an area that — until recent times — was an integral part of Russia.
This dynamic might change if Ukraine fractures. Western Ukraine has historic ties to Poland and Hungary. But right now, most Western nations see Ukraine as lying, in part, within Russia’s legitimate sphere of influence.
Fourth, NATO is drawing a new line in the sand. In effect, the alliance is saying to Putin: Yes, you may have your way with Ukraine, but that’s it. No more.
From this comes the call for a new rapid response force. NATO already is able to deliver troops to a hot spot within five days. The alliance is now proposing a force that could react within two days.
This is designed to allay the fears of NATO members such as Latvia and Estonia, which border Russia.
It is also designed to circumvent NATO’s 1997 pledge not to establish permanent bases in Eastern Europe.
Under the new plan, the alliance won’t exactly have permanent bases near Russia. But it will set up permanent supply depots filled with armaments that can be used by its rapid response teams.
Not surprisingly, Russia is unimpressed by these subtle distinctions.
Fifth, the new tension suits forces on both sides. In Russia, it boosts the hand of ultranationalists around Putin who view the dismantling of the old Soviet Union as a historic mistake.
In the West, it gives NATO’s military bureaucracy a new purpose.
Since the collapse of the Soviet Union, the alliance has been trying to justify its existence.
At times it portrayed itself as a kind of international policeman, bombing Serbia in 1999 and Libya in 2011. In Afghanistan, it led an ill-starred war against the Taliban.
Now, thanks to the Ukrainian crisis it can return to its original mission — containing Russia.
As long as Moscow can be portrayed as a threat, there will be no talk of downsizing or dismantling NATO’s Brussels-based bureaucracy.
For Western politicians, the crisis has mixed effects. To U.S. President Barack Obama, it is a curse. As the leader of the world’s most powerful nation, he is expected to do something to dissuade Russia. But he knows that, militarily, there is little practical that he can do.
To Prime Minister Stephen Harper, the crisis is a blessing. He publicly excoriates Putin as an aggressor. Yet no one expects Harper to send Canadian troops into battle in Eastern Ukraine. Indeed, Canadian defence spending overall remains below NATO standards.
In short, the prime minister can engage in cheap talk. For a politician, this is ideal."
Robert Fisk

By Jirair Tutunjian, Toronto, 27 May 2009 The following is the third part of a discussion that took…
Read More
0
0
0 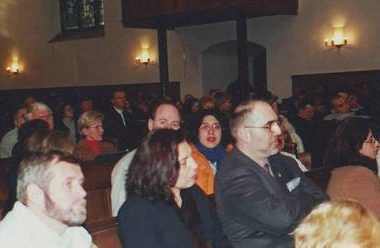