The Department of Sociology at Ryerson University and the Federation of Canadian Turkish Associations organised an evening lecture by Turkkaya Ataov, a leading denier of the Armenian Genocide, on Wednesday, February 18, 2009 at Ryerson University.  The website dedicated to his North American tour stated that, “The ATAOV conference series is designed to inform the Turkish American community on the issues related to the so-called Armenian Genocide with the goal to achieve a unified stand on the issues.”

The event was in fact a tutorial on how to deny the Armenian Genocide, much like the denial of the Jewish Holocaust by pseudo-historians. This raised many eyebrows amongst the students and staff at Ryerson University who were concerned that a Canadian academic institution was complicit in genocide denial.

After hundreds of letters of complaint, a student petition, and meetings with Ryerson administration, the Armenian Students’ Association at Ryerson finally received a letter of apology from the president, Dr. Sheldon Levy, which read, “On behalf of Ryerson University, I would like to apologize for the pain and suffering experienced in particular by the members of the Armenian Community as a result of this event”

Dr. Levy also displayed the university’s commitment to uphold the truth by setting the record straight regarding the Armenian Genocide when he said, “Ryerson University supports Prime Minister Harper’s statement on behalf of all Canadians that the Armenian Genocide is a historical fact, unquestionably part of the historical record with tremendous suffering.”

According to genocide scholars, genocide denial is the last stage of the very crime of genocide. Furthermore, the prevention of future cases relies heavily on how we approach similar cases that have occurred in the past. Society has seen the psychological and physical trauma caused by genocide denial, yet society allows it to happen under the guise of freedom of speech. One such example is Sudan, where the international community is currently witnessing the ongoing genocide while the president of the country, Omar al-Bashir, continues to deny his actions. Prime example of how deadly denial can be when we fail to recognize the pain and suffering victims to genocides are forced to experience when faced with genocide denial.

The manipulation of public opinion, the educational system, academia, and politics are all methods employed by the government of Turkey to pursue genocide denial domestically and abroad. Article 301 of the Turkish Penal Code, an example of one such policy which incriminates anyone who dares to mention the Armenian Genocide, has already been the cause for the assassination of Turkish-Armenian journalist Hrant Dink in January 2007 by an ultra nationalist Turkish citizen in Istanbul.

Although the university is an arena that fosters freedom of speech, it is not a place for the type of discrimination and racism produced by the deniers of genocides. Ryerson University’s recent apology and commitment to uphold the truth regarding the Armenian Genocide is exemplary. With the recent letter, Ryerson has sent a strong message to deniers that our academic institutions will not be deceived into sponsoring genocide or tricked to pursue the agenda of a foreign government. Ryerson University has contributed to the prevention of future genocides together with safeguarding the rights of the victims and their descendents, who have the right to mourn, remember, and share this historical reality free from further persecution, threats, and discrimination. 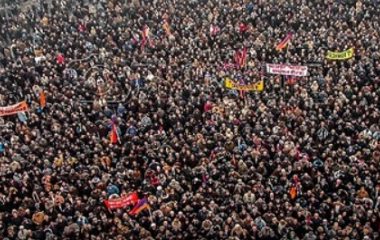 Read More
David Boyajian, 5 December 2011 The Anti-Defamation League’s hostility to Armenian Americans is no secret. The ADL and…
Read More
0
0
0