The Hidden Language of Civilization (Part I of III)

By Lia A. Avetissian, Yerevan, November 2012

Yerevan-based Lia A. Avetissian is a linguist, author, Armenologist, translator, and an investigative journalist. A graduate of the Faculty of Oriental Studies at the Yerevan University, Ms. Avetissian will publish her next book–"These Incredible Armenians"–in 2013.

Armenians are huge lovers of bread. “Bread” in Armenian is հաց (“hats”). For that reason “to eat” sounds in Armenian “հաց

ուտել” (“to eat bread”). And this is applied even to a new-born baby, who is still feeding on mother’s breast.

When a husband returns home with his friends and randomly throws the line to his wife: «հաց դիր» (“hats dir” which means “put on bread”), it does not mean that soon there will be only bread on the table; there will also appear cheese, herbs, various snacks and salads.

Even the word “hunger strike” is translated into Armenian as “refusal of bread”, հացադուլ (“hatsadul”). If we try to translate the Armenian word հոգեհաց “hogehats”, (“funeral repast” in English) we will still have the meaning of “bread in the name of the soul of the departed”.

By Lia A. Avetissian, Yerevan, November 2012

Yerevan-based Lia A. Avetissian is a linguist, author, Armenologist, translator, and an investigative journalist. A graduate of the Faculty of Oriental Studies at the Yerevan University, Ms. Avetissian will publish her next book–"These Incredible Armenians"–in 2013.

Armenians are huge lovers of bread. “Bread” in Armenian is հաց (“hats”). For that reason “to eat” sounds in Armenian “հաց

ուտել” (“to eat bread”). And this is applied even to a new-born baby, who is still feeding on mother’s breast.

When a husband returns home with his friends and randomly throws the line to his wife: «հաց դիր» (“hats dir” which means “put on bread”), it does not mean that soon there will be only bread on the table; there will also appear cheese, herbs, various snacks and salads.

Even the word “hunger strike” is translated into Armenian as “refusal of bread”, հացադուլ (“hatsadul”). If we try to translate the Armenian word հոգեհաց “hogehats”, (“funeral repast” in English) we will still have the meaning of “bread in the name of the soul of the departed”.

In brief, bread is the basis not only of Armenian cuisine, but also of human relations. Armenians even swear on their honor, putting their hands on bread and saying: “Let’s take this sacred bread as my solemn witness” (էս սուրբ հացը՝ վկայ). In fact, the heroes of the Armenian epic story about the odd and stubborn characters of Sassoon (“Սասնայ ծռեր”), used to swear on their honor by mentioning bread and wine, just like Jesus did much later on.

The dual important role of bread in Armenian life is expressed in the language and in all its dialects. And the role of dialects is not less important. Before the Genocide of 1915, there were more than 60 spoken Armenian dialects. If you cross the zone of application of one dialect, then know for sure that you will find specific ways of cooking national dishes there, with different selections of herbs, grains, spices and other ingredients. However, you will also notice in no time the same specifics in the design of carpets, clothing and household items, wedding ceremonies and glorifications, which are also reflected in the uniqueness of the terminology.

That is why linguists, who try to conduct their studies by abstracting off the material culture and the intangible heritage of the nation in question, are destined to make false conclusions. This very error occurred with the “Kypchak language”, which was the spoken Armenian dialect in the Crimea that included many Turkish words. After the exodus of the Armenians according to the behest of Catherine the Great in the 18th century, many Armenian town-council books and other documents that were written in the Armenian alphabet by native Armenian speakers were left behind, in the Crimea. After nearly 130 years, during the Soviet era, these were “recognized” by some ignorant linguist-classifiers as being written in a separate Turkic “Kypchak” language – clearly a false conclusion.

Judging by the short word “hats” (հաց), it can be understood that bread is one of the oldest components of the Armenian menu. After all, like any human child, nascent humanity was getting used to speech, starting with one-syllable words. The older a nation is the more monosyllabic words it has in its language. Of course, with the development of science and technology, the words become coated with very long structures. However, the richer and more inclusive the original vocabulary is filled with short words, the more organic is the language for the native speakers.

Also, the temporal and genetic relationship among those who used to speak that language in the past and the ones who continue now to speak the language is stronger. And, when we consider the existence of short words in the terminology of different fields, we can see that the language is actually supporting its own nation, at the time of its entry into the historical arena, with the already familiar baggage of skills and knowledge.

If you try to reveal a compound word, as if it was packaging, and if you find two or three short roots with a meaning inside, you can then be sure that the knowledge associated with them was available to your forefathers long ago, perhaps, long before it was presented by the most imperfect of all sciences – linguistics.

Let’s look at the word "theory", which was once written in Armenian almost in the same way "te / or / ea", թէ/որ/էա, but literally meant "if (in fact, it) exists." It seems like there is no better and clearer way to define the actual essence of the concept of "theory". However, in the 20th century, the word was re-translated from the ancient Greek, where it was interpreted as "I observe". And here, we obtained the ridiculous word "tesutyun" (տեսութիւն) in the Armenian newspeak.  Although, mere observations for the creation of a theory are not enough; the ability to organize a system is needed here, which should be supported by the eternal questions: "Are my conclusions correct?” or "Does that element of a system really exist?".

By the way, the word "theorem" in Armenian is almost synonymous, but with the presence of the author's personal factoring, "te / or / ima", թէ/որ/իմա which means “If (in fact) I get it." After all, theorems and theories still need to be proven, unlike the axioms. Although for Armenians, who like to explore the world, the axiom contains an element of subjectivity as well, because "aks / (z) / ima” in Armenian is Ակս/զ/իմա, which is “My view on the Knowledge."

Words are not some random collections of sounds, flowing one after the other through all the countries and continents supported by self-progression, as it is commonly believed. Double book-keeping in linguistics, which once disfigured the mounting vocabulary of humanity by transferring it from "dead languages" and filling it with rough and far-fetched meanings, can play a cruel role. This is not especially the case for the people whose role in civilization has been skillfully hidden for several hundred years. Word is the main tool of our thinking and understanding of the world, and from its distortion not only just some of us suffered, but especially entire nations.

For example, there is the word “byur” (բիւր) in the decimal system of the Armenian language, which stands for “ten thousand”. In Ancient Rome and Byzantium among all administrators, those who were the most competent people and had organizational skills were called "byur / a / krats” բիւրակրած, which means "carrier of 10,000 (merits)," i.e., obviously referring to a sage and a leader in one packaging. As the recruitment of human resources was proceeding, taking into consideration the exceptional abilities of applicants, that word was a living proof, speaking for itself, binding as a job description.

But it was enough to erase from the administrative term its initial Armenian meaning, to present it as a cross between the modern French (“bureau”, part of those leading a corporate structure) with the ancient Greek (“kratos,” power), which, let’s face it, is ridiculous – and have a look at what happened to humanity – as ubiquitous bureaucracy became a global problem, whose employees certainly are not among the scholars and commanders.

Mikhail Zurikyan, a remarkable Volgograd engineer, built bridges in peacetime, and during the Second World War blew them up. For both activities he was awarded with orders and medals, as he was able to find brilliant solutions in both cases. However, as it turned out, Zurikyan – who became an orphan in Western Armenia during the horrors of the Genocide in 1915, grew up in a Lebanese orphanage run by American missionaries, and spent his adult life in Russia – realized better than many linguists that there is construction not only with metals, but also with words.

Perhaps this was because he could simply see the difference between mounting elements and structural parts. In 1993, at the age of 86, Mikhail Zurikyan wrote and published 300 copies of a thin book entitled "Secrets of the Dialect," which would explode in the face of Armenian and world linguistics. But we already know that linguistic science is still a tool of a larger politics; that is why we need to be alert. In his book, Zurikyan practically outlined a new theory of the Indo-European parent language, showing that the Armenian, which has been represented as a very old but a deadlocked branch of the tree of the Indo-European languages, in fact, is its trunk and roots.

Unaware of Zurikyan revelations, Muscovite Areg Dyushunts went on to show in his brilliant series of publications ("Mind Code: a Verbal Algebra of Harmony") that the Armenian language is the parent language of all humanity. Samwell Garibyan, a Guinness record holder, famous for his outstanding mathematics memory and in many languages, advanced the same conclusions in his publications. In his 2011 book, “A Study of the Origins of the HAI, the First People”, professor at the University of London and polyglot Hovhannes Pilikian, claimed that all languages of the world are dialects of the Armenian language, while drifting away from it in various degrees.

Of course, you can shrug and ignore this scanty little nation with limitless civilizational ambitions. Or, you can try to get acquainted with its language. Although this process will be much more time-consuming than shrugging, but will be much more exciting as well. 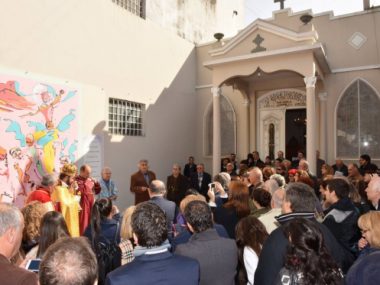 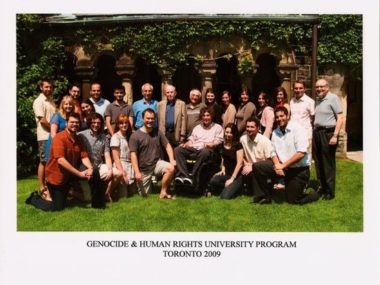 Read More
Unlike widely reported genocides, such as those in Nazi Germany, Rwanda and Cambodia, some atrocities remain unacknowledged, are…
Read More
0
0
0

Read More
By Keghart.com Editorial Board, 17 December 2010 Ever since Raffi, Raphael Badganian, Mikael Nalbandian, Alishan and other greats…
Read More
0
0
0