“When we have settled the land, all the Arabs will be able to do about it will be scurry around like drugged cockroaches in a bottle.”—Raphael Eitan, Chief of Staff, Israeli Defense Forces, 1983

It seems what Eitan had in mind for the Palestinians are being implemented against Javakhk Armenians by the dictatorial and ultra-nationalist regime of Georgia’s President Mikhail Saakashvilli.

Since Georgia gained its independence, authorities in Tbilisi have made a covert and overt state policy to persecute non-Georgian minorities, including Armenians living in Tbilisi and in Javakhk.

“When we have settled the land, all the Arabs will be able to do about it will be scurry around like drugged cockroaches in a bottle.”—Raphael Eitan, Chief of Staff, Israeli Defense Forces, 1983

It seems what Eitan had in mind for the Palestinians are being implemented against Javakhk Armenians by the dictatorial and ultra-nationalist regime of Georgia’s President Mikhail Saakashvilli.

Since Georgia gained its independence, authorities in Tbilisi have made a covert and overt state policy to persecute non-Georgian minorities, including Armenians living in Tbilisi and in Javakhk.
While Saakashvilli portrays his country as little David facing the Russian Goliath, it’s also true that he is running an imperialist-racist state when it comes to minority rights. We have already witnessed a number of ethnic groups (Abkhazians, South Ossetians, Ajarians) bridle at the ultra-nationalistic policies of Georgian authorities. It’s obvious the dream of the Tbilisi government is to create a 100% “pure” Georgian state– through harassment of non-ethnic Georgians, through assimilation and even good, old-fashioned racial persecution. Although Tbilisi claims that ethnic Georgians make up 83.3% of the 4.6 million population, it’s a fact that the percentage is highly inflated. After all, the republic has at least 10 minorities (Avars, Hamshen Armenians, Jews, Greeks, Laz, Bats, Kist, Lom, Mskhetian Turks, Udi, Ukrainians, and Urums) in addition to Armenians, Azeris, Russians, Ossetians, Abkhazians and Ajarians. While exaggerating the number of Georgians, Tbilisi falsely alleges that there are only 250,000 Armenians in Georgia, instead of 400,000.

In the past five years the Javakhk Armenians have become a target of the authorities in Tbilisi, especially after the Russian military evacuated their Javakhk bases.

According to Europe-based YERKIR NGO, “Everyday the Javakhketi Armenians are suffering from political, linguistic, cultural, educational, religious and socio-economic discrimination.” Although Georgia has ratified the various international documents for the protection of national minorities, Tbilisi gives lip service to these commitments.

Javakhk was part of Armenia Major as early as in 8th century B.C., during the reign of Argishty, king of Armenia . In the 16th century there were 200 Armenian villages in the region. The area, which reminds people of an unspoiled Switzerland, is jam-packed by Christian and pre-Christian Armenian buildings and monuments. The three main districts of Javakhk are Akhalkalak, Akhaltsekha, and Ninozminda. The first one has 63 villages; the second, 47 villages; and the third 32 villages. Javakhk covers an area of 850 square miles. While historically the population was more than 90% Armenian, there has been a decline in the 140,000 Armenian population in recent years due to emigration to Armenia and to Russia. While the Armenian percentage has shrunk, thanks to undemocratic and discriminatory Georgian policies, the percentage of Armenians is much higher than the 54% that Tbilisi claims. Most Armenians in the region are farmers. While Tbilisi Armenians are relatively in a better shape, they too complain about discrimination. Best chance of success in Tblisi is to change one’s name to shvili, dze, and ani, Armenians in the capital have told Diaspora Armenian journalists.

To say that the Javakhk region is the most underdeveloped and impoverished area of a backward Georgia says a great deal about the lot of Javakhk Armenians. The region has the highest rate of unemployment and lowest rate of state investment. There is no industry, while agriculture is Medieval. Javakhk is an economic, geographic and political desert island.

The complaints of Javakhk Armenians in particular and Georgia Armenians in general make a long and justified litany of maltreatment by Georgian authorities. Here’s a brief and incomplete summary of their complaints:

1. The local self-government bodies of Armenian-populated areas of Javakhk are denied the right to exercise the powers provided to them by law.
2. The internal socio-political and administrative life of Armenians is superseded by the heavy hand of Georgian police and security services.
3. The law requires mandatory and sole use of Georgian language in all spheres of public life in Armenian populated areas.
4. The Armenian Apostolic Church still has no legal status in Georgia. Churches confiscated during the Soviet era have not been returned to the Armenian Church. At the beginning of the 20th century there were 29 Armenian churches in Tbilisi. Now only two function. What the Georgians haven’t confiscated, they have destroyed. Demonstrating its naked animus towards Armenians, Georgia has not acknowledged the veracity of the Armenian Genocide.
5. Georgian authorities continue their campaign of changing place names from Armenian to Georgian.
6. Georgian border guards create artificial obstacles to the importation of Armenian books and periodicals.
7. After Javakhk Armenians demanded autonomy, similar to the ones enjoyed by a number of other ethnic groups, Georgian special troops conducted (July 15, 2008) terror operations to shut down all Armenian organizations. Several Armenian policemen were killed (Georgians said one of the policemen had committed suicide!), Armenians were beaten, a youth radio station was shut down and its equipment confiscated. They arrested Armenian community leaders and their family members. The Georgians jailed Vahakn Chakalyan, the head of United Javakhk Democratic Alliance, on trumped up charges. Due process was dismissed. Chakalyan, his father and brother are still in jail. Since the Georgian police action, a number of Armenian leaders have left the country to avoid further persecution. Several of these leaders were handed long-term sentences in absentia. Politicians and public figures in Armenia, who dare speak on behalf of Javakhk Armenians, are banned from entering Georgia.
8. In an attempt to artificially alter the demographics of the region, Georgian authorities have settled Georgians, Ajarians and Meskhet Turks in Javakhk.
9. The 400,000-strong Armenian community has only five seats in the 235-seat Parliament.

The United Nations Human rights Committee in its 91st session (Oct. 2007) called upon Georgian authorities to take steps to ensure to all citizens the equal enjoyment of the right of freedom of religion and asked Tbilisi to ensure that its legislation and practice conform fully to international standards and practice. Nice words which carry no weight for the reckless Saakishvilli regime.

A few weeks ago Javakhk, Armenia and Diaspora organizations founded the Coordinating Council for the Protection of the Rights of Javakhk Armenians to fight for Javakhk Armenian rights. The new organization, which includes the Compatriotic and charitable Javakhk NGO, the Analytical Center ‘Midk’, the political party ‘Virk’, the public movement ‘Javakhk’ and the Yerkir Union of NGOs for Repatriation and Settlement, will intensify the involvement of all Armenians in efforts to protect the rights of Javakhk Armenians. The new organization will campaign against the fascist policies of Georgia and demand that Tbilisi stop its anti-Armenian campaign.

In a Javakhk-Yerevan joint news release the Council said that it would demand that all political prisoners be set free, the rule of law be implemented, and the security of Armenians guaranteed. The Council will demand that Georgia recognize the Armenian Apostolic Church as a legal entity and return Church properties. It will also demand that legislation be enacted to allow the use of the Armenian language in all spheres of public life in local administrative areas where the Armenian population represents a majority.

Although according to the press in Armenia, Yerevan has tried to relieve the pressure on Javakhk Armenians, in the current political, economic and military climate Armenia finds its hands tied when it comes to condemning the fascist acts of Tbilisi. Polite demands by the UN do not worry seemingly bi-polar Saakashvilli, especially since he has become the regional poster boy of the United States.

The Javakhk crisis is another circumstance where the Diaspora can and should play an active part — pressure Georgia to come to its senses — since the leaders of the motherland find themselves between a rock and a hard place.

Read More
By Harut Sassounian Publisher, The California Courier, 24 September 2009   In earlier columns, I had described the…
Read More
0
0
0 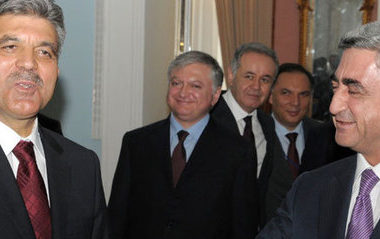 Read More
At the annual gathering of the MFA senior executive staff and Heads of the Armenian Embassies and Consulates…
Read More
0
0
0
Alain NY, NY — "The Lark Farm", the movie version of Antonia Arslan’s novel which has won over…
Read More
0
0
0