The Mysterious Case of the Vanishing Aliyev Statue

[Scene: The palatial office of Minister of Azeri Propaganda, Mythinformation and Manufacturing Consent  Eshek  Abdalov. He is fuming, because his sausage-size fingers are hitting two letters at a time when he tweets. A male secretary slinks in.]

ABDALOV: What do you want? How many times have I told you not to bother me when I am tweeting?

[Scene: The palatial office of Minister of Azeri Propaganda, Mythinformation and Manufacturing Consent  Eshek  Abdalov. He is fuming, because his sausage-size fingers are hitting two letters at a time when he tweets. A male secretary slinks in.]

ABDALOV: What do you want? How many times have I told you not to bother me when I am tweeting?

ABDALOV: You don’t have to tell me who is. I know who he is

SECRETARY: He says two trucks arrived on Boulevar Reforma in Mexico City this morning to dismantle the statue of our President for Life, Light of his Nation, Father of his People Heydar Aliyev. He said the Mexicans are upset because the statue was placed too close to that of Gandhi and Ibrahim Lincoln of America, and they were unhappy about the plaque under our Glorious Leader’s name.

ABDALOV: What did the plaque say?

SECRETARY: Here, I wrote it down: “A brilliant example of infinite devotion to the motherland, loyal to the universal ideals of world peace.”

ABDALOV: I know, I know, they are carping because the Father of Axerbaijan was a senior officer of the KGB. I’m sure Saroukhan, the Armenian who is Mexico’s ambassador to the US, is behind this outrage. Call… what’s his name… the minister of finance…Tatarov…tell him to sell the millions of Mexican bonds we have bought in recent months and to liquidate our investments on their stock market. That should teach a lesson to those ingrate Mexicans. I’m not surprised: they are all the b—–ds of the Spanish conquerors.

SECRETARY: Immediately, effendi, immediately. What do we do with the statue? We spent $10 million to have it made.

ABADALOV: Hmmm… We could relocate it in a country close to Mexico. What’s the closest country to Mexico?

ABDALOV: Don’t be stupid. The United States is full of Armenian lobbyists. We can’t put the statue there.

ABDALOV: Are you hitting the bottle again? That’s where Americans keep Al-Qaida freedom fighters… our brother Jihadists, the Salafists, the Mujahideen. Why would we send the Father of Axerbaijan to prison? Are you losing your mind?

ABDALOV: Don’t presume to teach me geography. I know where Guadalcanal is. John Wayne fought the Japanese there. I saw the movie on TV a few weeks ago.

ABDALOV: You say Guadalcanal is a poor country. It means we would to make a smaller investment there than we did in Mexico and in Hungary.

SECRETARY: Guatemala is the land of the Mayas. According to the Maya calendar, the world will come to an end in a month. What if the calendar is correct?

ABDALOV: That still gives us time to transport the statue to Guat…whatever it’s called. Why don’t countries have simple names like Oman, Qatar, Amman, Agra?

SECRETARY: I’m sorry, effendi, but Agra is a city in India. The Taj Mahal is there.

ABDALOV: One more insolent know-it-all comment like that… and you’re fired. I don’t care if your father-in-law’s partner is the second cousin of our president. I will not tolerate insubordination. Get out and tell the shipping manager I want to see him NOW.

SHIPPING MANAGER: Emad said you wanted to see me, effendi.

ABDALOV: Now listen carefully: I don’t want to repeat myself. Those drug-smuggling gavoor Mexicans have removed the statue of the Father of Axerbaijan from the main street of their capital. The Armenian lobby is behind it. Call our ambassador…uh…Muradov… and make arrangements for the statue to be sent to Guadalcanal.

SHIPPING MANAGER: Excuse me, effendi, did you say Guadalquivir in Spain?

ABDALOV: Here we again. Have you been talking to Emad, the know-it-all? Didn’t you hear what I just said? Guantanamo. Guantanamo is near Mexico. Get a truck company to send the statue there.

ABDALOV: Shut up… Do what I said. Can’t you see I am trying to write the speech His Glorious Highness Heydar Aliyev will deliver when we conquer Armenia?

SHIPPING MANAGER: But effendi, Guantanomo is on an island.

SHIPPING MANAGER: A truck can’t deliver the statue to an island. We need a ship.

ABDALOV: Get out, get out… (tosses his Iphone). Ship it anywhere… to the jehannam, for all I care.  Wait, wait… you didn’t hear that. I meant send the statue to je… Genoa. That’s in Switzerland, for your information.

Read More
Reporter, 26 January 2015 In the past year Keghart.com has promoted the idea that when commemorating the centennial…
Read More
0
0
0 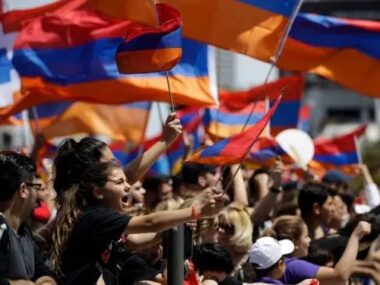 Read More
By Jirair Tutunjian, Toronto, Ontario 30 January 2021 While there has been a great deal of advice about…
Read More
0
0
0

Read More
This article is an edited version of a presentation given in April before a Massachusetts Armenian American audience.-Ed.…
Read More
0
0
0
By Antoine S. Terjanian, Yeghegndazor, Armenia   Here, on the steep slopes of our mountains, there is no…
Read More
0
0
0
Spotlight, 9 May 2009 The amazing story of how Adolf Hitler plotted to assassinate Soviet leader Joseph Stalin,…
Read More
0
0
0

Read More
130370 reads 27 November 2010We, Armenians living in the Diaspora and our non-Armenian friends, are deeply concerned in…
Read More
0
0
0