Chilcot and the courts won’t do it, so it is up to us to show that we won’t let an illegal act of mass murder go unpunished

The only question that counts is the one that the Chilcot inquiry won’t address: was the war with Iraq illegal? If the answer is yes, everything changes. The war is no longer a political matter, but a criminal one, and those who commissioned it should be committed for trial for what the Nuremberg tribunal called "the supreme international crime": the crime of aggression.

Chilcot and the courts won’t do it, so it is up to us to show that we won’t let an illegal act of mass murder go unpunished

The only question that counts is the one that the Chilcot inquiry won’t address: was the war with Iraq illegal? If the answer is yes, everything changes. The war is no longer a political matter, but a criminal one, and those who commissioned it should be committed for trial for what the Nuremberg tribunal called "the supreme international crime": the crime of aggression.

But there’s a problem with official inquiries in the United Kingdom: the government appoints their members and sets their terms of reference. It’s the equivalent of a criminal suspect being allowed to choose what the charges should be, who should judge his case and who should sit on the jury. As a senior judge told the Guardian in November: "Looking into the legality of the war is the last thing the government wants. And actually, it’s the last thing the opposition wants either because they voted for the war. There simply is not the political pressure to explore the question of legality – they have not asked because they don’t want the answer."

Others have explored it, however. Two weeks ago a Dutch inquiry, led by a former supreme court judge, found that the invasion had "no sound mandate in international law". Last month Lord Steyn, a former law lord, said that "in the absence of a second UN resolution authorising invasion, it was illegal". In November Lord Bingham, the former lord chief justice, stated that, without the blessing of the UN, the Iraq war was "a serious violation of international law and the rule of law".

Under the United Nations charter, two conditions must be met before a war can legally be waged. The parties to a dispute must first "seek a solution by negotiation" (article 33). They can take up arms without an explicit mandate from the UN security council only "if an armed attack occurs against [them]" (article 51). Neither of these conditions applied. The US and UK governments rejected Iraq’s attempts to negotiate. At one point the US state department even announced that it would "go into thwart mode" to prevent the Iraqis from resuming talks on weapons inspection (all references are on my website). Iraq had launched no armed attack against either nation.

We also know that the UK government was aware that the war it intended to launch was illegal. In March 2002, the Cabinet Office explained that "a legal justification for invasion would be needed. Subject to law officers’ advice, none currently exists." In July 2002, Lord Goldsmith, the attorney general, told the prime minister that there were only "three possible legal bases" for launching a war – "self-defence, ­humanitarian intervention, or UNSC [security council] authorisation. The first and second could not be the base in this case." Bush and Blair later failed to obtain security council authorisation.

As the resignation letter on the eve of the war from Elizabeth Wilmshurst, then deputy legal adviser to the ­Foreign Office, revealed, her office had ­"consistently" advised that an ­invasion would be unlawful without a new UN resolution. She explained that "an unlawful use of force on such a scale amounts to the crime of aggression". Both Wilmshurst and her former boss, Sir Michael Wood, will testify before the Chilcot inquiry tomorrow. Expect fireworks.

Without legal justification, the war with Iraq was an act of mass murder: those who died were unlawfully killed by the people who commissioned it. Crimes of aggression (also known as crimes against peace) are defined by the Nuremberg principles as "planning, preparation, initiation or waging of a war of aggression or a war in violation of international treaties". They have been recognised in international law since 1945. The Rome statute, which established the international criminal court (ICC) and which was ratified by Blair’s government in 2001, provides for the court to "exercise jurisdiction over the crime of aggression", once it has decided how the crime should be defined and prosecuted.

There are two problems. The first is that neither the government nor the opposition has any interest in pursuing these crimes, for the obvious reason that in doing so they would expose themselves to prosecution. The second is that the required legal mechanisms don’t yet exist. The governments that ratified the Rome statute have been filibustering furiously to delay the point at which the crime can be prosecuted by the ICC: after eight years of discussions, the necessary provision still has not been adopted.

Some countries, mostly in eastern Europe and central Asia, have incorporated the crime of aggression into their own laws, though it is not yet clear which of them would be willing to try a foreign national for acts committed abroad. In the UK, where it remains ­illegal to wear an offensive T-shirt, you cannot yet be prosecuted for mass ­murder commissioned overseas.

All those who believe in justice should campaign for their governments to stop messing about and allow the international criminal court to start prosecuting the crime of aggression. We should also press for its adoption into national law. But I believe that the people of this nation, who re-elected a government that had launched an illegal war, have a duty to do more than that. We must show that we have not, as Blair requested, "moved on" from Iraq, that we are not prepared to allow his crime to remain unpunished, or to allow future leaders to believe that they can safely repeat it.

But how? As I found when I tried to apprehend John Bolton, one of the architects of the war in George Bush’s government, at the Hay festival in 2008, and as Peter Tatchell found when he tried to detain Robert Mugabe, nothing focuses attention on these issues more than an attempted citizen’s arrest. In October I mooted the idea of a bounty to which the public could contribute, ­payable to anyone who tried to arrest Tony Blair if he became president of the European Union. He didn’t of course, but I asked those who had pledged money whether we should go ahead anyway. The response was overwhelmingly positive.

So today I am launching a website – www.arrestblair.org – whose purpose is to raise money as a reward for people attempting a peaceful citizen’s arrest of the former prime minister. I have put up the first £100, and I encourage you to match it. Anyone meeting the rules I’ve laid down will be entitled to one quarter of the total pot: the bounties will remain available until Blair faces a court of law. The higher the ­reward, the greater the number of ­people who are likely to try.

At this stage the arrests will be largely symbolic, though they are likely to have great political resonance. But I hope that as pressure builds up and the crime of aggression is adopted by the courts, these attempts will help to press ­governments to prosecute. There must be no hiding place for those who have committed crimes against peace. No ­civilised country can allow mass ­murderers to move on. 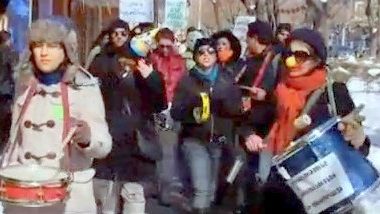 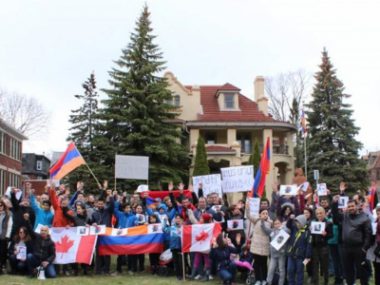 Read More
Souren Seraydarian, France, 16 January 2012 A number of comments and articles have appeared in recent issues of…
Read More
0
0
0