Astute observers know that Russia needs Armenia as much as Armenia needs Russia.

Armenia is Russia’s only ally in the strategically crucial Caucasus.

Russia would, consequently, lose the entire Caucasus (which includes Georgia and Azerbaijan) if Armenia joined the Western Bloc — defined as America/Europe/NATO (sometimes including Turkey and Israel).  Here’s why.

Astute observers know that Russia needs Armenia as much as Armenia needs Russia.

Armenia is Russia’s only ally in the strategically crucial Caucasus.

Russia would, consequently, lose the entire Caucasus (which includes Georgia and Azerbaijan) if Armenia joined the Western Bloc — defined as America/Europe/NATO (sometimes including Turkey and Israel).  Here’s why.

Georgia has favored the Western Bloc since independence, desires NATO membership, and no longer depends on Russian natural gas.

Azeris feel hemmed in by Russia and would like to join NATO.  Azerbaijan sends its Caspian Sea oil and gas westward through Georgia, Turkey, and beyond.  Another major gas pipeline is planned.  Significantly, at Israel’s behest top Jewish American organizations quietly support Azerbaijan.

Russia’s sees its left flank, consisting mainly of NATO and pro-NATO nations, as a major threat.

If Russia loses Armenia, and thus the Caucasus, sooner or later the Western Bloc would penetrate via Turkey straight to the Caspian and create a powerful NATO fleet.  Just 150 miles farther lay the vast energy resources of Russia’s Turkic/Muslim underbelly, ripe for NATO’s picking.

This is essentially pan-Turkism.  Russia dreads it while the Western Bloc tacitly supports it.  This explains Russia’s acute anxiety over what happens in Armenia.

That is, Moscow pressures Yerevan precisely because its security depends on Armenia.

Russia has two military bases in Armenia, sells it weapons, and guards its border with Turkey.

Armenians rightly welcome this as defense against genocidal Turkey.

But — again — Russia’s primary motive is thwarting Western Bloc/Turkish domination of the entire Caucasus and, from there, the Caspian, and Russia’s Central Asian underbelly.

Armenia must, nevertheless, remain militarily (though not always economically) tied to Russia because for the foreseeable future Armenia cannot find security in the pro-Turkish Western Bloc.

Even if Yerevan and Ankara normalized relations, and the former joined NATO — huge ‘ifs’ — Turkey’s belligerence and greater weight would still threaten Armenia.

NATO has, after all, long tolerated Turkish aggression in Cyprus, the Aegean Sea, the Middle East, and against its own minorities.

The Western Bloc has, moreover, never offered Armenia any real security, and has implicitly consented to Turkey’s ongoing closure of its border with Armenia.

Had Turkey, as planned, invaded Armenia in 1993 during a failed coup in Moscow, the Western Bloc would likely not have stopped the invasion.

The Western Bloc even supports blatantly corrupt Azerbaijan and tolerates its aggression against Artsakh/Armenia.

And, of course, Europe and America provided no significant military aid to Armenians during the 19th and 20th century genocides.

Russia supplies nearly all Armenia’s natural gas and oil and has a significant position in its energy infrastructure.  Russia also limits the amount of natural gas that Iran supplies to Armenia.

Armenia’s Soviet-era Metsamor nuclear power plant is also controlled by Russia.  It generates about 40% of the nation’s electricity.

Moscow irrationally worries that its only democratic ally, Armenia, could be a model for unseating Russia’s own leaders.

The Kremlin apparently prefers autocratic, corrupt foreign leaders whom it can intimidate because they don’t answer to the people in free elections.

The Kremlin did not congratulate Pashinyan on his party’s smashing parliamentary victory in December 2018.  It did, however, phone ex-president Robert Kocharyan, sitting in jail on various charges, on his birthday.

The Kremlin has also unfairly sided with corrupt Belarus and Kazakhstan in not allowing an Armenian to complete Armenia’s remaining term for the CTSO’s ex-secretary-general, Yuri Khachaturov.  Pashinyan’s government had indicted Khachaturov over the March 2008 killings of Armenian demonstrators.

Russia apparently will also raise the price of the natural gas it supplies Armenia by 10%.

Now the Kremlin is pushing Armenia to sign a long-term agreement prohibiting the latter from hosting troops from third countries, though Yerevan plans no such deployments.

To alarm Armenia and make it ever more dependent, it’s foreseeable — indeed, may have happened in the past — that Moscow would give Baku the green light for a major attack on Artsakh/Armenia.  Russia would then use some pretext to refuse to defend Armenia despite their mutual defense treaty.  Armenia would be unable to ask another country for military support if it signs the Kremlin’s proposed agreement.

PM Pashinyan has promised that Armenia’s pro-Russian orientation will not change.  He has even vowed allegiance to the CTSO, the ineffectual, Russian-led defense alliance, even though members Belarus and Kazakhstan are hostile to Armenia.  Armenia will also stay in the EEU, the Russian-led economic bloc of debatable benefit to Armenia.

Armenians don’t want to break away from Russia — unless Russia betrays Armenians first.

They simply want to eradicate corruption, benefit from the political/economic freedoms people have in democracies, trade with the West and others (as Russia does in the hundreds of billions), and build a stronger Armenia.  Diasporan Armenians feel similarly.

A stronger Armenia whose citizens stay in the country is in Russia’s own interests.

But non-too-subtle Russian threats are no way to treat an ally.  No country should be bullied into being undemocratic, corrupt, poor, and dependent.

Russia believes that Armenia lacks gratitude for “defending” it and is too distrustful.  Though Armenians actually are grateful, they remember Russian betrayals that include giveaways of Armenian territory to Turkey and Azerbaijan in the 20th century.

Russia is alarmed by Armenian interaction with the Western Bloc and China.  Armenia feels similarly about massive Russian arms sales to Azerbaijan and military and energy deals with Turkey, the latter two countries being genocidal enemies of Armenians.

Russia feels that Armenia should have a more positive view of Russians. Armenia generally does regard Russians well.  But polls reveal that many Russians view Armenians negatively.  Moreover, Armenians rarely hear Russian leaders tell their citizens about Armenia’s importance and the two peoples’ commonalities.

Due to geography and its history of empire, Moscow has often manipulated other ethno-national groups or set them against each other.  While Russia sees this as natural, Armenians wonder whether Russia can distinguish between its proven enemies and a friend and ally such as Armenia.

Russia controls and limits the natural gas that Armenia imports from Iran in order to profit from selling Russian gas to Armenia (via hostile Georgia) and to make Armenia more dependent and compliant.  Armenia correctly believes this endangers its national security.

Perhaps because it’s far larger and brawnier, Russia too often looks down on Armenia.  Armenians regard this as overbearing and ill-mannered.

With effort, though, every contrasting perspective can probably be reconciled.

Armenia should always remember, however, its vital importance to Russia.

There is no turning back from the path of self-reliance that Armenia is walking.  This must be voiced in the most friendly way to Russia.

And the two countries must always fully and publicly air their differing perspectives for both their sakes.

David Boyajian is an Armenian American freelance journalist.  Many of his articles can be found at Armeniapedia.org/wiki/David_Boyajian.

Read More
For many years Barouyr Aghbashian was the editor of Zartonk in Beirut. As a member of the Armenian…
Read More
0
0
0 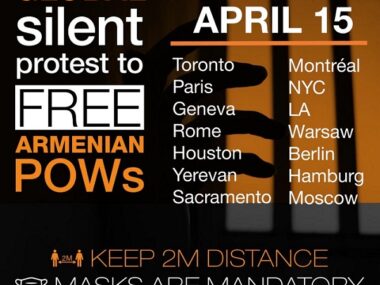 Read More
From Place De La Republique in Paris to the California State Capitol in Sacramento, to Wilshire Blvd. in…
Read More
24
0
0